Skip to content
Home > Chemistry > The neurotransmitters glutamate and GABA
Published 23.05.2022 by admin

The neurotransmitters glutamate and GABA 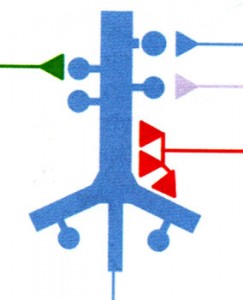 Glutamate and gamma-aminobutyric acid ( GABA ) are the two most abundant neurotransmitters in the brain . Ninety percent of cortical neurons use glutamate , the main excitatory neurotransmitter that increases the likelihood of developing an axonal action potential on a postsynaptic neuron when released into the synaptic cleft.

In the human brain, glutamate is most commonly used by large pyramidal neurons in the cortex and deeper brain structures. Also, this mediator is often used in modified synapses, causing learning.

Gamma-aminobutyric acid (GABA), in contrast to glutamate, is the main inhibitory neurotransmitter in the cerebral cortex . Inhibitory synapses reduce the likelihood of an action potential passing down the axon of a postsynaptic neuron.

GABA is prevalent in interneurons surrounding pyramidal cells. It is believed that in this case it serves to regulate the continuous excitatory activity of the cortex.

The functioning of the brain does not require the constant activity of all excitatory synapses. In this case, positive feedback loops would form in the brain, strengthening with each cycle. The cortex will be overloaded, as in the case of epileptic seizures.

Excess glutamate is toxic and leads to a phenomenon called excitotoxicity . Most of the damage from seizures does not come directly from them, but from the excess release of glutamate.

It’s like exploding a fuel tank in a burning car: the explosion does much more damage than the flame that caused it. Neurotransmitters are useful only in strictly defined amounts .

Glutamate (Glu) is also excellent for looking at how neurotransmitters are formed from existing molecules. Glutamine is one of the amino acids that animals get from food . The brain, in turn, uses glutamine to transmit an excitatory signal.

We can taste glutamate in food, as was discovered by Japanese scientists in 1907 when they studied soy sauce. The taste of glutamate is the fifth basic taste, in addition to the four main ones, for which we have separate receptors; it is called umami. The taste of glutamate helps to determine the edibility and freshness of food, a feature essential to the hunters and gatherers of the primitive world.

We can consider the three-cell system shown in the figure below as a production line for certain amounts of the neurotransmitter glutamate, transport them to the synapse using vesicular transport, and release them into the synaptic cleft. The small oval organelle at the top of the cell is the mitochondrion, which produces most of the cellular ATP.

This entire system is fed by glucose and oxygen diffusing through the membranes from the capillary on the right. Glucose is used for energy and also for the synthesis of the neurotransmitter glutamate. 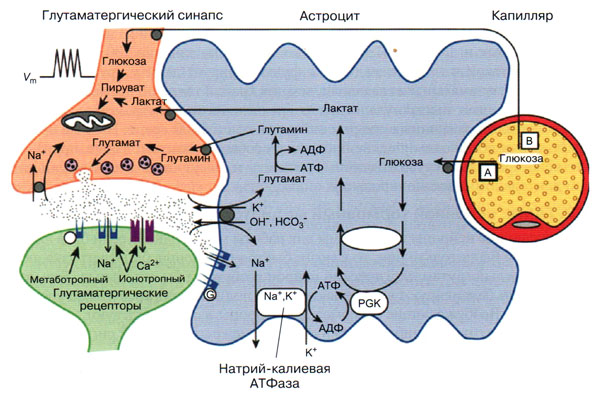 Glucose is also one of the intermediate metabolites in the synthesis of glutamate. V m is the membrane potential of the upper neuron, which shows several spikes that cause the release of the mediator into the synaptic cleft, PGK is phosphoglycerate kinase.

Note that the postsynaptic cell has two types of glutamate receptors. Metabotropic receptors are used to respond to the metabolic pathways of the cell. Ionotropic receptors activate ion channels: sodium, potassium and calcium.

The astrocyte in the middle of the circuit is also important for the operation of the entire system. It takes up glucose, breaks it down and converts ADP to ATP in its mitochondria, sends glutamine to the presynaptic cell where glutamate is synthesized from it, and grabs excess glutamate diffusing out of the synaptic cleft.

Glutamatergic signaling is highly accurate in time, its neurotransmitter can be rapidly removed from the extracellular space; it also leaves no toxic compounds in the extracellular environment. At the same time, almost all biochemical processes, especially oxidative ones, produce some amount of toxic substances and can be very harmful in the long run.