Skip to content
Home > Education > The gastrula is a two-layer embryo, consisting of two germ layers: the outer (ectoderm) and the inner (endoderm).
Published 23.05.2022 by admin

The gastrula is a two-layer embryo, consisting of two germ layers: the outer (ectoderm) and the inner (endoderm).

Ontogeny is the individual development of an organism from the beginning of existence to the end of life.

In the ontogeny of animals, two periods are distinguished – embryonic and postembryonic .

Embryonic (embryonic) development covers the processes from the first division of the zygote to exit from the egg or birth, and in most animals includes three main stages: crushing, gastrulation and organogenesis.

Cleavage is seven to eight consecutive mitotic divisions of the zygote.

When crushed, the daughter cells ( blastomeres ) do not diverge and do not increase in size. With each subsequent division, their size decreases.

Oocytes with a small supply of nutrients are completely divided, that is, complete crushing occurs. If the egg contains a large amount of yolk, then partial crushing is observed – only the cytoplasm disk with the nucleus divides, and the yolk itself remains unchanged (for example, in birds).

Cleavage ends with the formation of a single-layer multicellular embryo – blastula.

Blastula is a spherical embryo, the wall of which (blastoderm) is formed by one layer of cells, and inside is a cavity (blastocoel).

After crushing, the process of gastrulation occurs, which is characterized by the movement of part of the cellular material from the surface of the blastula inward, to the places of future organs. As a result of these movements, a gastrula is formed.

The gastrula is a two-layer embryo, consisting of two germ layers: the outer (ectoderm) and the inner (endoderm).

The internal cavity of the gastrula is called the primary gut . It is connected with the external environment by an opening ( blastopore ), which becomes the primary mouth . 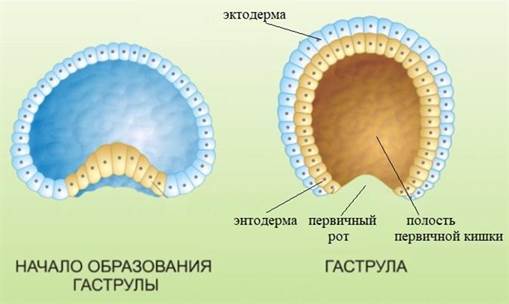 At the stage of two germ layers, the development of sponges and intestinal cavities ends.

In all other animals, development continues, and a third germ layer is formed – mesoderm . It is formed from the endoderm and is always located between the ecto- and endoderm in the primary body cavity.

Further differentiation of the cells of each germ layer leads to the formation of tissues and organs, i.e. to histo- and organogenesis .

From the ectodermlocated above the notochord itself, the neural plate stands out. Then the edges of the plate rise and close. The neural tube is the rudiment of the central nervous system. A neurula is formed. 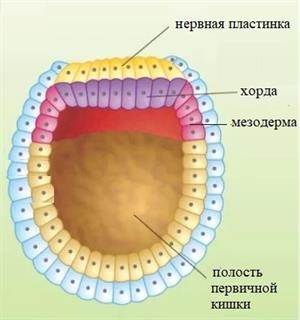 The neural tube, notochord, and intestines form the axial complex of the organs of the embryo, which determines the bilateral symmetry of the body. 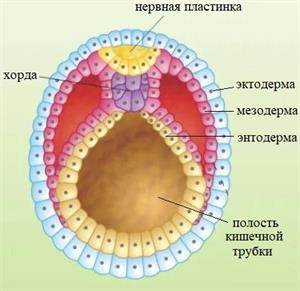 Tissues and organs develop in the same way in all three-layered animals.

From the ectoderm in vertebrates, the nervous system, sensory organs, integumentary epithelium with its glands and derivative structures (hair, feathers, hooves, claws, etc.) are formed.

From the endoderm , the organs of the digestive and respiratory systems are formed: the epithelium of the middle intestine, the liver and pancreas, gills, lungs, swim bladder, and the thyroid gland.

Muscle tissue, all types of connective tissue (for example, the dermis of the skin, vertebral bodies), the circulatory system, excretory organs, and sex glands are formed from the mesoderm .

The embryo develops as a single organism in which all cells, tissues and organs are in close interaction.

In animals, three types of ontogeny are distinguished: larval, ovipositor, and intrauterine.

The larval type of development is found in insects, fish and amphibians. There is little yolk in their eggs, and the zygote quickly develops into a larva that feeds on its own. 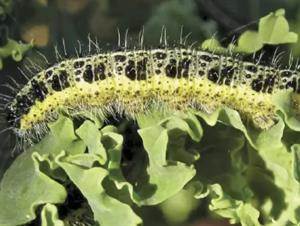 The larva actively feeds and increases in size. Then metamorphosis occurs – the transformation of the larva into an adult organism. 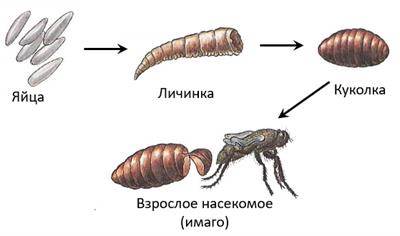 The presence of the larval stage provides animals with the opportunity to live in different environments and use different foods. For example, caterpillars feed on leaves, and butterflies feed on nectar; tadpoles feed on zooplankton, and frogs feed on insects.

In sedentary, attached and parasitic species, free-living larvae contribute to the dispersal of the species and expansion of the range. This avoids overpopulation and reduces intraspecific competition for food and other resources.

The oviparous type of ontogenesis is found in reptiles, birds, and oviparous mammals (platypus and echidna). Their egg contains a large supply of nutrients, the embryo develops in the egg, and there is no larval stage. 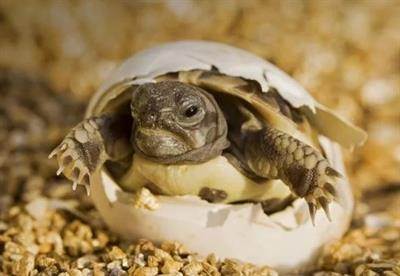 The intrauterine type of ontogenesis is observed in most mammals, including humans. In this case, the development of the embryo occurs in the mother’s body. The mother’s body provides all the needs of the growing embryo (breathing, nutrition, excretion) through a special organ – the placenta . Intrauterine development ends with the birth process.