Skip to content
Home > Chemistry > The decision of the battalion commander for defense
Published 23.05.2022 by admin

The decision of the battalion commander for defense

When drawing on the map the decisions of the battalion commander for defense, the following are applied to it: the position of the enemy; dotted lines – company and platoon strongholds; position of neighbors and dividing lines with them; artillery and anti-tank fire systems; anti-tank and anti-personnel barriers;

command and observation post. The map also reflects data on the use of forces and means according to the plan of the senior commander (chief) in the interests of the battalion and issues of interaction between units.

The sequence of applying a decision to the defense outside of contact with the enemy can be approximately as follows.

Before a decision is made, the following shall be put on the map:

– information about the enemy;

– the position of units at the time of receiving a combat mission (up to platoon);

– neighbors on the right and left (defense areas of neighboring battalions, strongholds of flank companies), demarcation lines with them;

– tasks solved by the forces and means of senior commanders (chiefs) in the interests of the battalion (artillery fire sites, firing positions of the supporting division; deployment lines and directions of counterattacks of the second echelon; firing positions of anti-aircraft units covering the battle order of the battalion; firing lines of the anti-tank reserve and tank units );

– control points and elements of the rear of the senior commander;

— data on radiation and chemical conditions.

In the course of making a decision, the following is put on the map:

– battle order and engineering equipment of the battalion defense area;

– lines of fire of the companies of the first and second echelon (reserve), places of platoon strongholds and the outline of the position of the outposts;

– the lines of deployment and the direction of counterattacks of the second echelon, the firing lines of the tank unit;

– main and reserve (temporary) firing positions of full-time, attached and supporting artillery and mortar units and their firing missions;

– main and reserve firing positions and sectors of fire of fire weapons at the disposal of the battalion commander;

– firing positions of an anti-aircraft unit;

The listed data is applied using graphic symbols used in combat documents. In addition, the work map in tabular form displays the distribution of forces and means, as well as symbols; the official heading and signature are drawn up in the set font. 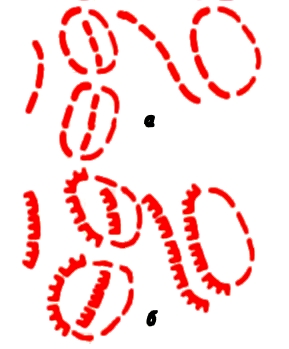 To speed up the mapping of strong points of companies and platoons by decision of the commander (as well as the positions of subunits in the defense), you can use the following method: first, the main lines characterizing the outline of trenches and strong points as a whole are plotted on the map (Fig. 78, a).

At the same time, in order to draw a defense area or a location area, it is more expedient to first find or outline points that determine its size, and then draw a line. This will eliminate the possible zigzag of the line drawn when sequentially finding, for example, the first and second points and connecting them.

Without knowing the third point, you can make a mistake in the angle of the line to the local object.

Then the map is rotated so that the position of the troops (true or by decision) is deployed by the front to the north (in the event that the front of action is directed in the other direction), and dashes are drawn on the drawn lines (Fig. 78, b). The advantage of this method is that dashes “on a line” from top to bottom can be applied much faster and more accurately than, for example, from left to right or vice versa. In addition, this work can be done not during the period when the commander announces the decision, which is practically impossible, but after, when the map is being finalized.

It is better to outline the strong points of companies and platoons with lines after drawing the rest of the elements of the defense structure on the map.

When assigning tasks to subunits according to the work map, the commander can indicate in which direction to concentrate the main efforts or to prevent an enemy breakthrough. The following mistake often occurs here: the first point of a given direction is indicated at some, and sometimes even at a considerable distance, from the forward edge of the subunit’s defense. This leads to the fact that the unit is actually unable to complete the task of preventing the enemy from breaking through from point A to the front line. since this area is currently occupied by it. For the same reason, the main efforts of the unit cannot be concentrated in this direction.

In such cases, when setting tasks according to the working map, it is advisable to indicate this direction so that its first point (A) is directly in front of the forward edge or on it, and the second point is in the depth of defense (Fig. 79).

Rice. 79. The procedure for indicating the direction of concentration of the main efforts in defense

The time of occupation by units of the defense battalion is indicated once under the inscription of the number and name of the battalion or by each unit (Fig. 80). 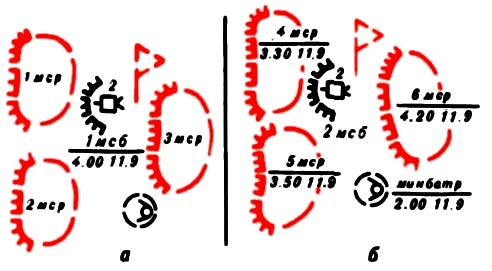 Rice. 80. Designation on the map of the time of occupation of defense: a – by all units 1 msb to one time; b—by units 2 msb at different times