Topic: Inhibition in the CNS. Principles of coordination activity of the central nervous system.

To study the nature, functional significance, structural and functional organization of inhibition in the central nervous system.

Inhibition in the central nervous system is a special nervous process caused by excitation and manifested in the suppression of another excitation.

Classification and mechanisms of central braking:

Reverse braking. It is realized through inhibitory Renshaw cells, open in the spinal cord. The axons of the motor neurons of the anterior horns give off a collateral to the Renshaw inhibitory neuron, whose axons return to the same motor neuron, forming inhibitory synapses on it. Thus, a circuit with negative feedback is formed, which makes it possible to stabilize the frequency of motoneuron discharges.

Central (Sechenov) inhibition. It is carried out by inhibitory intercalary neurons, through which the influence on the motor neuron of the spinal cord of excitation that occurs in the visual tubercles under the influence of their irritation is realized. On the motor neuron of the spinal cord, EPSPs that occur in the pain receptors of the limb and TPSP that occur in inhibitory neurons under the influence of excitation of the thalamus and the reticular formation are summarized. As a result, the time of the protective flexion reflex increases.

Lateral inhibition is carried out with the help of inhibitory intercalary neurons in parallel neural networks.

Primary presynaptic inhibition develops in the terminal sections of axons (before the presynaptic structure) under the influence of special axo-axonal inhibitory synapses. The mediator of these synapses causes depolarization of the membrane of the terminals and brings them into a state similar to Verigo’s cathodic depression. The membrane in the area of such a lateral synapse prevents the conduction of action potentials to the presynaptic membrane, the activity of the synapse decreases. 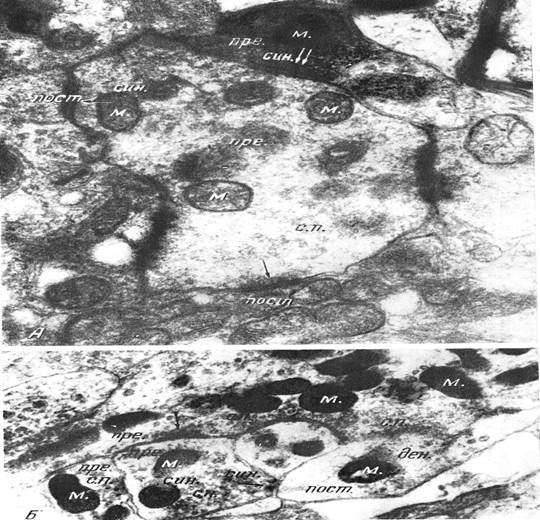 A. Schematic of an experiment to demonstrate presynaptic inhibition of monosynaptic EPSPs in a motor neuron.

B. EPSP during stimulation of homonymous Ia fibers without (left) and after (right) pre-activation of presynaptic inhibitory interneurons.

Stimulation of the inhibitory interneuron suppresses the monosynaptic EPSP of the motor neuron.

The development of this EPSP suppression proceeds with a latent period equal to 5 ms, the maximum is reached after 20 ms, and the total duration exceeds 200 ms.

Inhibitory synapses at the ends of Ia fibers provide a fairly significant depolarization, called primary afferent depolarization , or primary efferent depolarization (PAD). In the spinal cord, PAD exhibits a long phase (up to 25 ms) of rise to a rounded apex and is characterized by a longer duration compared to postsynaptic processes. The long duration of PAD is explained either by the prolonged action of the mediator, or by a slow, passive decrease in depolarization due to the large electrical time constant of the membrane. The passively decreasing PAD component is removed by an impulse propagating along the afferent fiber to its central endings.

There is a correspondence in all respects between the observed depolarization of the primary afferent fibers and the suppression of their synaptic excitatory action.

The nature of PAD in different neurons differs in its characteristics. In general, the time parameters are comparable. PAD of cutaneous nerve fibers is characterized by a larger amplitude for single stimuli with a shorter latent period (about 2 ms), the maximum is also reached earlier than in the case of PAD caused by rhythmic stimulation of nerve fibers coming from the muscles. PAP in the sphenoid nucleus has a short latent period (about 2 ms) and a rapid rise to a maximum.

Inhibitory synapses are chemical in nature; GABA serves as a mediator in them. Depolarization of the primary afferents inactivates excitatory sodium channels. Shunting of sodium channels reduces the amplitude of the presynaptic action potential. As a result, synaptic transmission of the motor impulse is weakened or eliminated.

Presynaptic inhibition serves as a mechanism for regulating the motor systems of the spinal cord. Its feature is the possibility of a specific effect on individual synaptic inputs without changing the excitability of the entire cell. Thus, redundant information is eliminated even before it reaches the site of integration of the cell body of the neuron.

2. Secondary inhibition is not associated with inhibitory structures, it is a consequence of previous excitation. Pessimal inhibition (discovered by N.E. Vvedensky in 1886) develops in polysynaptic reflex arcs with excessive activation of central neurons and plays a protective role. It is expressed in persistent depolarization of the membrane, leading to inactivation of sodium channels. “Inhibition following excitation” develops in neurons immediately after the action potential and is typical for cells with long-term trace hyperpolarization. Thus, the processes of inhibition in local neural networks reduce excessive activity and are involved in maintaining optimal modes of neuron activity.

The principle of irradiation of excitation. Irradiation – distribution, expansion of the reflex response. This is the phenomenon of “spreading” of excitation through the neurons of the central nervous system, which develops either after the action of a superstrong stimulus, or against the background of inhibition being turned off. The spread of excitation is possible due to numerous contacts between neurons that occur during the branching of axons and dendrites of intercalary neurons. Irradiation allows you to increase the number of muscle groups involved in the reflex response. Irradiation is limited by inhibitory neurons and synapses.

Against the background of the action of strychnine, which blocks inhibitory synapses, generalized convulsions occur with tactile stimulation of any part of the body or with irritation of the receptors of any sensory system. In the cerebral cortex, the phenomenon of irradiation of the inhibition process is observed.

The coordination of reflex acts is based on certain mechanisms based on the structural and functional organization of the central nervous system and referred to as the “principles” of the formation of a reflex response.

The principle of reciprocal innervation . Reciprocal (conjugate) coordination was discovered by N.E. Vvedensky in 1896. Due to reciprocal inhibition, i.e. activation of one reflex is simultaneously accompanied by inhibition of the second, opposite in its physiological essence.

The principle of a common “final path “. Opened by the English physiologist C. Sherrington (1906). One and the same reflex (for example, muscle contraction) can be caused by irritation of various receptors, since the same terminal a-motor neuron of the anterior horns of the spinal cord is part of many reflex arcs. Reflexes, the arcs of which have a common final path, are divided into agonistic and antagonistic. The former reinforce, the latter inhibit each other, as if competing for the final result. Reinforcement is based on convergence and summation, competition for the final path is based on coupled inhibition.

Feedback principle. Any reflex act is controlled by feedback from the center. Feedback consists in secondary afferentation entering the central nervous system from receptors that are excited when the functional activity of the working organ changes. For example, action potentials due to excitation of receptors in muscles, tendons, and articular capsules of a flexing limb, during the act of flexion, enter all structures of the central nervous system, starting from the centers of the spinal cord. A distinction is made between positive feedback (which reinforces the reflex, which is the source of reverse afferentation) and negative feedback, when the reflex that causes it is inhibited. Feedback underlies the self-regulation of body functions.

The principle of return . The phenomenon of recoil consists in the rapid change of one reflex by another of the opposite value. For example, after flexion of a limb, its extension is faster, especially if the flexion was strong. The mechanism of this phenomenon is that with a strong contraction of the muscles, the Golgi receptors of the tendons are excited, which, through inhibitory interneurons, inhibit the motoneurons of the flexor muscles and form a branch that excites the center of the extensor muscles. Thanks to this mechanism, you can get the sum of reflexes – chain reflexes (the end of one reflex response initiates the next) and rhythmic (multiple repetition of rhythmic movements).

Dominant principle . The final behavioral effect in the coordination of reflexes can be changed depending on the functional state of the centers (the presence of dominant foci of excitation).

Features of the dominant focus of excitation:

2. Persistence of the excitation process.

3. The ability to summation of excitation.

4. Inertia. The focus dominates, suppresses neighboring centers by conjugated inhibition, being excited at their expense. The dominant can be obtained by chemical action on the centers, for example, with strychnine. Dominant excitation is based on the ability of the excitatory process to irradiate along neural circuits.