The appearance of a certain number of nuclear erythrocytes 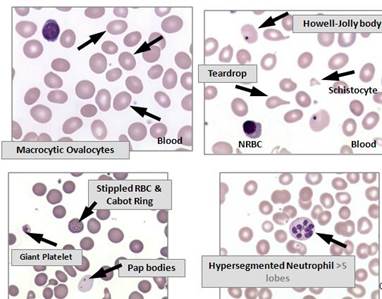 An increase in MCV, MCH with normal MCHC is observed in megaloblastic anemia, since the content of hemoglobin in cells is increased in proportion to the increase in the size of red blood cells.

In the bone marrow with megaloblastic anemia, the myeloid / erythroid ratio is changed (from 2:1 to 1:2) due to the large number of erythroid precursors.

Clinical manifestations of msegaloblastic (pernicious anemia) – anemia, in which vitamin B12 deficiency is caused by autoimmune destruction of the parietal cells of the stomach that produce the intrinsic factor: all symptoms of anemia + • weight loss, gastrointestinal tract disorders, pain in the tongue or mouth, glossitis; pallor and yellowness of lemon color, early gray hair, vetiligo. Neurological changes (may be irreversible): dementia, depression, behavioral changes (megaloblastic madness); difficulty walking.

Defective DNA synthesis is carried out in all proliferating cells, including the gastrointestinal tract, which is manifested by glossitis (Fig.)

The main changes in vitamin B12 deficiency involve the brain and spinal cord. Damage to the nervous system is caused by degeneration of myelin due to the accumulation of methylmalonate and propionate due to impaired conversion of methylmalonyl CoA in the absence of vitamin B12