assembly .. General arrangement, completeness, grenade launcher .. The concept of the operation of its components and mechanisms when firing, 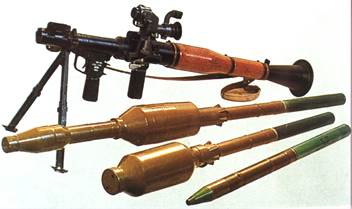 The RPG-7V hand-held anti-tank grenade launcher (RPG-7N-with a night sight) is designed to fight tanks. self-propelled artillery mounts (ACS) and other enemy armored vehicles. In addition, it can be used to destroy enemy manpower located in light shelters, as well as in urban-type structures.

The weight of a grenade launcher with an optical sight is 6.3 kg.

The order of incomplete disassembly of the grenade launcher.

· Put the parts and mechanisms in the order of disassembly, handle them carefully.

I. Remove covers (first from the breech, and then from the muzzle of the grenade launcher).

Pushing out the checks shock-

and remove the striker, striker spring and support sleeve from the base of the striker mechanism.

Unscrewing the nipple of the firing mechanism

Assembly order of the grenade launcher

4. Check the correct assembly of the grenade launcher:

5. Put on covers (first on the muzzle, and then on the breech).

The grenade launcher consists of :

1. Barrel with a mechanical (open) sight.

2. Trigger mechanism with a fuse.

Tool ; 1 wrench; 2 drift; 3 devices for assembling and disassembling USM (in the pocket of the bag for two grenades)

Accessories : I. cleaning and lubricating rod for grenade launcher (in a bag for two grenades)

2. stem with a washer to remove the remnants of the powder charge from the bore of the barrel. (in a bag for two grenades).

5. A bag for storing and carrying three grenades with powder charges.

6. A bag for storing and carrying two grenades with powder charges. 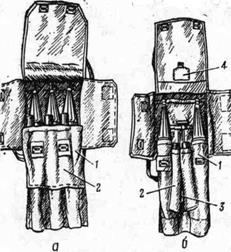 a – a bag for three grenades:

b – a bag for two grenades;

I – socket for a grenade.

2 – nests for a pencil case with a powder charge;

Z – socket for a ramrod;

4-pocket for spare parts and tools

When fired from a grenade launcher, a powder charge is ignited by the impact of the striker on the primer-igniter of the grenade. The gases formed from the combustion of a powder charge give the grenade a rotational motion and throw it out of the barrel at a speed of 120-140 m / s.

After the grenade leaves the barrel, the stabilizer feathers open, the fuse is cocked at a distance that ensures the safety of the shooter and the ignition of the powder charge of the jet engine. When the powder charge of a jet engine burns, due to the outflow of powder gases through the nozzle holes, a reactive force is formed and the speed of the grenade increases, reaching 300 m / s at the end of the complete combustion of the charge.

When a grenade meets an obstacle, the piezoelectric element of the fuse is compressed, as a result of which an electric current is generated, under the influence of which the electric detonator of the fuse explodes, and then the explosive charge of the grenade. When a grenade explodes, a cumulative jet is formed that pierces armor, strikes manpower, and destroys weapons and equipment.

When fired, the grenade launcher has no recoil. This is ensured by the outflow of powder gases back through the nozzle and the socket of the barrel nozzle. The resulting reactive force directed forward balances the recoil force,

2. Appointment and arrangement of parts and mechanisms of the grenade launcher and shots for it.

I. Barrel – for directing the flight of a grenade and removing powder gases when fired.

Consists of: a pipe and a branch pipe.

a). The pipe in the breech has a widening that forms a charging chamber.

b). Branch pipe – in the front part there is a nozzle, in the back part – a socket ending in a plate.

2. Trigger mechanism – for pulling the trigger from the cocking, striking the striker and setting the grenade launcher on the fuse.

Z. Fighting mechanism – for breaking the primer of the grenade igniter.

Sights are used to aim the grenade launcher when firing at targets at various distances.

The weight of the sight with a set of spare parts and a cover – 0.95 kg

The scale division of the sight is 100 m.

The division value of the lateral correction scale is 0-10. 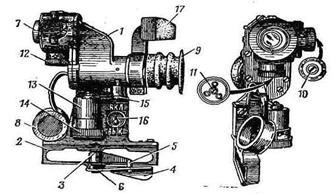 The optical sight consists of:

To illuminate the grid at temperatures from +2°C and below, it is necessary to use a winter grid lighting device.

If the sight is pitching or the stopper does not rest against the bracket when the sight is firmly fixed on the grenade launcher, you must:

– move the latch with a screwdriver key to

align the latch hole with the clamping screw and remove it;

– rearrange the handle by a few teeth on the clamping screw and achieve 1-latch; 2-hole latch; normal 3-clamp screw; 4-handle.

fixing the sight on the grenade launcher;

– put the latch on the clamping screw and position it so that its protrusion fits into the socket of the handle.

The optical system consists of: 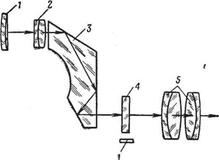 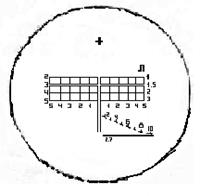 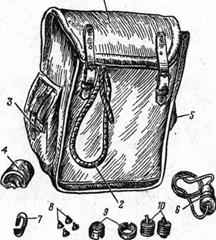 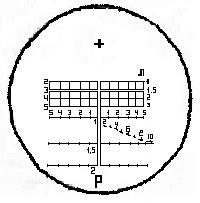 The rangefinder scale on the PGO-7V3 sight is designed for a target height of 2.4 m.

Above the scale of the sight there is a “+” sign that serves to check the sight.

Case for carrying an optical sight:

A mechanical (open) sight is used in

in case of damage (failure) of the optical sight.

It consists of an aiming bar with a clamp, the main and additional flies placed in casings.