The optical parameters of the optical fiber include the following characteristics:

– coefficient (index) of refraction of the core and shell

The refractive index is one of the main physical characteristics of optical media and is equal to the square root of the relative permittivity of the medium for electromagnetic waves in the optical range. Naturally, the refractive index depends on the chemical composition of the substance and has a different value for different wavelengths of propagating light. So for pure crystalline quartz in the wavelength range of 185 – 3000 nm, the refractive index for ordinary and extraordinary rays varies from 1.676 to 1.499 and from 1.689 to 1.507, respectively.

The difference between the refractive indices of the core n 1 and the cladding n 2 has a typical value of the order of 0.01 for MOV, less than 0.004 for OOV, denoted by D n and is calculated by the formula:

Similarly, for a fiber, the effective group refractive index is introduced as a coefficient showing how many times the speed of propagation of pulsed signals along the fiber is less than the speed of light in vacuum. In this case, the group velocity for the mth OF mode is calculated as the derivative of the angular frequency of light with respect to the propagation constant of the mth mode:

where w is the angular frequency of light, b m is the propagation constant of the m-th mode.

The first (multi-mode) OFs were fabricated with a Refractive Index Profile (RIP) as a step function shown in Figure 5.2a). The next step in the development of fiber production technology was the production of optical fibers with a gradient SPP (Figure 5.2b)), which have a significantly lower intermode dispersion and, as a result, more than an order of magnitude increased bandwidth (tens of MHz/km for stepped MOFs and about one GHz / km for gradient SOMs). In gradient MOFs, as well as in stepped ones, the core diameter is 50 μm, however, the refractive index changes smoothly, according to a law close to parabolic. As has been shown in numerous studies, it is precisely this SPP that provides the minimum dispersion distortion of the signal.

Among single-mode optical fibers, it is possible to single out fibers with unshifted and dispersion-shifted fibers, for which the SPP is significantly different – Figure 5.2c and Figure 5.2d, respectively. 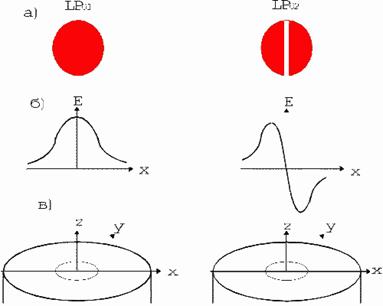 Figure 5.3 – The intensity distribution over the section a) and the radial distribution of the field E b) for modes LP 01 and LP 11 ; c) – cut of the fiber (the ratio of the diameter of the core and the shell is not observed)

The transverse shift method consists in the fact that light is introduced into the fibers joined together, and then the end of the second fiber is moved relative to the output end of the first fiber (i.e., it is scanned), while taking readings of the light intensity at the output of the second fiber. The mode spot diameter is determined from the level 1/e 2 »0.135 of the radial distribution of the light intensity. The second method, adopted by the American standards bureau TIA, is based on diaphragming the far-field pattern so that the integrated light intensity in the apertured region is 1-0.135 = 0.865 of the total light intensity in the far-field pattern. The mode spot diameter is calculated using the ratio of aperture diameters of the diaphragm, which allows obtaining both of these cases.

Here Jm is the angle in free space with respect to the OB axis, i.e. angle of input of optical radiation into OF. Meridian beam – a beam lying in the plane of the OB axis. The numerical aperture can be calculated in terms of the refractive indices of the core n 1 and the cladding n 2 :

As noted earlier, in a single-mode fiber, only one mode propagates at the operating wavelength. In this category of OF, we have the following types: standard single-mode fibre, zero-dispersion shifted fibre, and low non-zero dispersion fibre. They depend on the fiber design. When testing these types of fibers, it must be remembered that the light source (laser diode or LED) is not strictly monochromatic, and its output radiation covers a certain wavelength band. As a result of the fact that the propagation time of the spectral components is different, there is a broadening of the pulses. The degree of such broadening is proportional to the spectral width of the source used. Close-to-monochromatic (using a single longitudinal mode) laser sources (SLM lasers), typically distributed feedback lasers, allow normal operation with single-mode fiber at wavelengths that are farther away from the zero-dispersion wavelength than is allowed. lasers using multiple longitudinal modes (MLM lasers).