The purpose of the work: To acquire practical skills in conducting correlation analysis using specialized modules of the integrated system (IS) STATISTICA .

1) construction of a correlation field (scatterplot) for two economic indicators or two-dimensional sections, if we are talking about more of them;

2) determination of sample correlation coefficients or compilation of correlation matrices;

3) testing of static hypotheses about the significance of the relationship between the indicators.

The correlation coefficient estimates the tightness of the relationship between the variables under study and is a measure of the linear dependence of the values.

This coefficient, always denoted by the Latin letter r, can take values between -1 and +1, and if the value is closer to 1, then this means a strong connection, and if it is closer to 0, then a weak one.

Table 10.1. Gradations of the correlation coefficient

The statistical procedures of the STATISTICA system are grouped into several specialized statistical modules. In each module, you can perform a certain way of processing data without resorting to procedures from other modules.

Work in the STATISTICA system usually begins with the BasicStatistics / Tables module (Basic Statistics / Tables). It can be used to pre-process data, perform exploratory analysis of data, determine relationships between them, divide them into groups in various ways, view these groups visually and determine relationships between data. This statistical module includes various groups of statistical procedures that implement the methods of exploratory statistical analysis. The system can calculate almost all descriptive statistics, including median, mode, quartiles, means and standard deviations, confidence intervals for the mean, skewness, kurtosis (with their standard errors), harmonic and geometric mean, and many other descriptive statistics. A wide range of charts allows you to illustrate the exploratory data analysis.

Task 1. Analyze the indicators of economic activity of light industry enterprises [7]. Build a correlation matrix, give a graphical interpretation of the results. As initial data, use the data from Table P1 of Appendix 1.

X1 is the labor intensity of a unit of production, hours;

X2 is the share of workers in the PPP;

X6 is the share of losses from defects in the cost of production, %;

X8 – the average number of PPP;

X9 is the average annual cost of the OPS, billion rubles;

Let’s carry out a correlation analysis of the variables X1, X3, X7.

To perform correlation analysis, select the Basic Statiatics/Tables module and then the Correlation matrices item.

In the Pearson Product-Moment Correlation window that appears (Fig. 10.1), by clicking the Twolists button, you should determine which variables will be in the rows (First variable list) – these are the variables X1, X3, X7 and in the columns (Second variable list) is the Y variable (Figure 10.2). 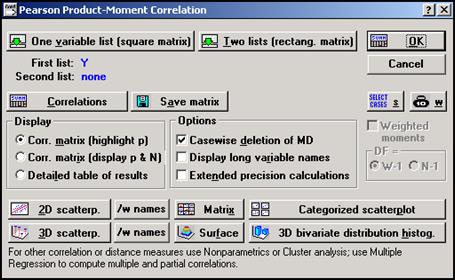 Click OK to confirm your selection and return to the Pearson Product-Moment Correlation window . 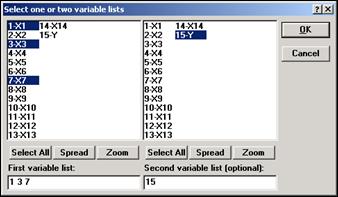 In the Pearson Product-Moment Correlation window, click OK as well. A correlation matrix will appear on the screen (Fig. 10.3).

To build a correlation matrix that reflects the closeness of the relationship between all variables, in the Pearson Product-Moment Correlation window, press the One variable list button and select the variables Y, X1, X3 and X7. Then return to the Pearson Product-Moment Correlation window and press the OK button. As a result, a correlation matrix will appear on the screen, reflecting all paired correlation coefficients for the variables under consideration (see Fig. 10.4). Coefficients that are significant at the p<0.05 level are automatically highlighted in red.

To build a graphical display of the correlation relationship of any two variables, you must click the 2D scatterplot button (scatterplot) in the Pearson Product-Moment Correlation window and determine which variables will be located on the horizontal and vertical axes. Let’s build a scatterplot for the variables Y and X1 (see Fig. 10.5).

For comparison, we construct a scatterplot for the variables Y and X7 in a similar way (see Fig. 10.6). 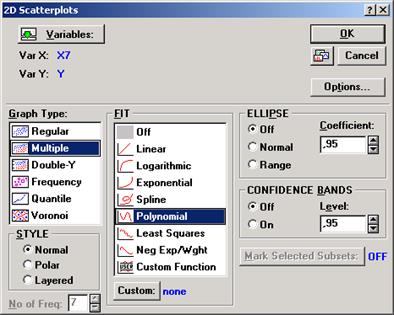 As a result, a scatterplot will appear on the screen (see Fig. 10.8), built on the basis of a polynomial of the fifth degree. An interesting fact is that the degree of the polynomial (the maximum is the fifth degree) STATISTICA determines itself, depending on the original data set. 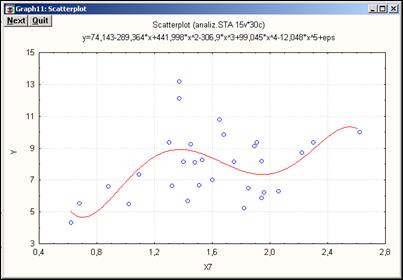 when approximated by a polynomial

As in Figure 10.5, this graph (Figure 10.8) presents a function that reflects the relationship between the variables Y and X7, and the correlation field of points. The graph clearly shows that the fifth degree polynomial does not properly describe the initial data. In this case, you should use the Nonlinear Estimation module mentioned above , which allows the user to create their own functions to approximate the data under study.

To evaluate all the connections visually, you can present the correlation matrix in a graphical form (see Fig. 10.9). To do this, in the PearsonProduct-Moment Correlation window, press the Matrix button, then select all variables by pressing the Select All button and confirm the selection by pressing OK. 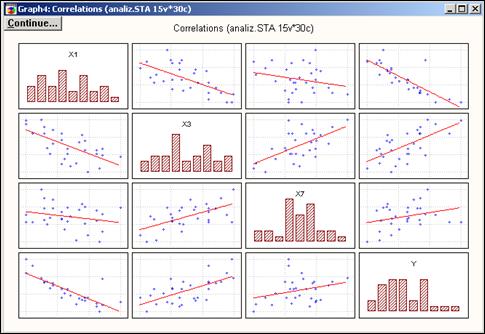 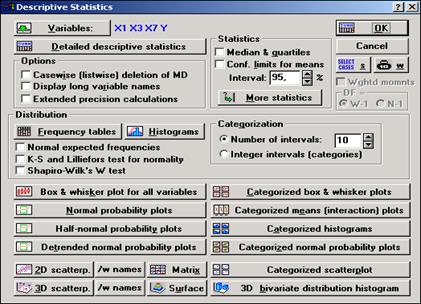 As can be seen from the table in Fig. 10.11, the distribution of variables is close to normal.

Task 1. Based on sample data (table 10.2), investigate the influence of factors X1, X2 and X3 on the effective attribute Y.

Having built a correlation field, make an assumption about the presence and type of relationship between the studied factors.

Task 2. Based on the data from Table P1 of Appendix 1

§ For the variables corresponding to your option (Table 10.3), construct a correlation matrix (take the variables X i as the first list of variables, the variable Y as the second list).

§ Perform a graphical analysis of the most correlated variables. Remove cases that negatively affect the correlation of values. Recalculate the correlation matrix. Draw a conclusion about how the matrix has changed after deleting the data.