Skip to content
Home > History > MICHAEL MYERS IS A REMAKE MANIAC REBORN. HUMAN OR EVIL IS INSPIRED?
Published 23.05.2022 by admin

MICHAEL MYERS IS A REMAKE MANIAC REBORN. HUMAN OR EVIL IS INSPIRED?

Rob Zombie in 2007 and again in 2009 brought us a very different take on slasher legend and Halloween franchise maniac Michael Myers. And even if the main order of events has remained unchanged, at the end we have a completely different story, in which the image of the hitherto unknown “other” Michael Myers appears.

Rob Zombie chose a different path by not making Michael a creation of evil forces. He decided to tell the story of an ordinary person, his childhood, to reveal the very real reasons for his formation as a cruel maniac. And therefore, a lot of attention was paid to his family and his childhood. 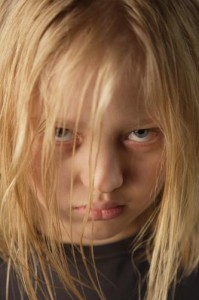 Michael was born into the Myers family. His father died and Michael lived with his mother named Deborah and his stepfather. Here Michael, unlike the original film, appears as a boy not 6, but 10 years old. Michael’s family was far from ideal. His mother worked as a stripper in a nightclub, and his stepfather was an alcoholic, disabled and dependent. Constant quarrels between parents, insults towards his mother, who for Michael was the only ray of light in his life, gradually formed hidden anger in him, making him more and more withdrawn and lonely. His stepfather did not like him and tried to insult him in every possible way. Michael did not have a relationship with his older sister Judith either. He also had a younger sister, Angela, whom he called Boo. The constant quarrels and atmosphere of war in the family, as well as bullying from other students at his school, increasingly dried out his heart and soul, which eventually began to result in Michael’s cruelty to animals. He liked to torture and kill them, after which he took photographs for his collection. For those who are more or less familiar with psychology, this is quite an obvious first “alarm bell” that can become a harbinger of the emergence in the child’s soul of a craving for violence and murder.

And the X-hour came on October 31st, the day of Halloween. After another skirmish between Michael and the students of the school, the director calls his mother to the school and introduces her to Dr. Loomis, who is seriously concerned about the boy’s behavior. He offers to deal with Michael before it’s too late. And yet he was late. 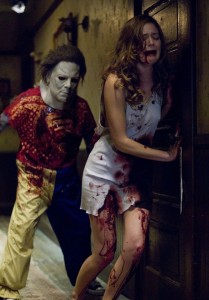 The last barrier on Michael’s path to immersion in the abyss of madness collapsed at the moment when one of the students spoke impartially about the profession of Michael’s mother. He became the first victim of Michael. After that, Michael returns home and kills his stepfather, finds the “Michael Myers mask”, after which he kills his sister Judith and her boyfriend. Michael’s mother, returning home after work, finds him, covered in blood, sitting on the porch of the house with his younger sister in her arms.

It is worth noting that in Rob Zombie’s films there are no exact dates, only data on days and months, but nothing on years.

11 months later, Michael is already serving his sentence in Smith’s Grove Mental Asylum under the supervision of Dr. Loomis. Loomis still hopes he can help Michael. However, every day Michael makes less and less contact, is constantly silent, and appears less and less without a mask, thereby, in his words, “hiding his ugliness.” According to Loomis, Michael is trying to hide from an aggressive society that he cannot resist. And even his mother, who constantly comes to see him, cannot do anything.

One day he kills a nurse with a fork. Dr. Loomis understands that before him is the real embodiment of evil, which even he has no strength to resist. After this incident, Michael’s mother commits suicide. 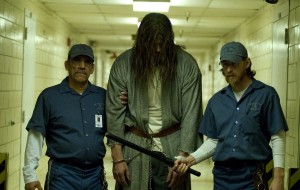 15 years later, we are back in Smith’s Grove. Michael is still imprisoned, and almost all the time he is engaged in the manufacture of all kinds of masks. At the same time, at the age of 25, Michael looks like a real giant, 2 meters tall and weighing around 120 kilograms. at least 20 kilograms of meat per day.”

The announcement that Dr. Loomis is ending his sessions with Michael, as well as the unacceptable behavior of the staff, leads to the fact that at one point Michael escapes Smith’s Grove and goes to Haddonfield to look for his sister Angela. Loomis, having learned about what happened, with horror goes to Haddonfield, preparing for the worst.

Angela, meanwhile, lives in Haddonfield with a foster family under the name Laurie Strode and is unaware of her family’s fate. This is where Michael finds her. 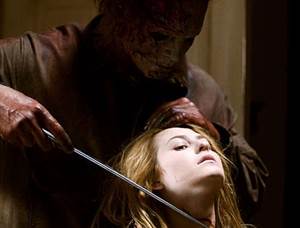 Having significantly reduced the population of Haddonfield, Michael finally gets to Laurie, but does not kill her, but takes her to the house where the Myers family used to live. Lori is horrified and desperate. Michael hands her a photo of himself aged 10 and little Angela…

And at this moment, all ideas about Michael Myers are turned upside down. No, here he does not seek to kill all the remaining members of his family. He just wants his family back, but Lori is the only one left alive. And he wants her to recognize and accept him. But Lori does not understand this, for her Michael is a soulless murderous maniac who wants her dead. And so she plunges a knife into his shoulder and runs away. As a result, Loomis saves Lori, but he himself is badly injured, and Lori shoots Michael in the face with a revolver.

The events of the second movie continue on the same Halloween night. Michael is loaded into an ambulance and taken away, but the car crashes on the way and Michael escapes. 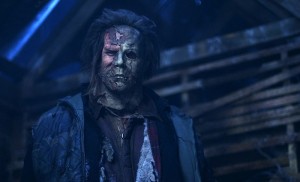 2 years later . Lori partially recovers from the nightmarish events. Left again an orphan after Michael killed her adoptive parents, she lives in the Brackett family, along with Sheriff Brackett and his daughter Annie, who miraculously survived after those events. However, the psychological trauma received by Lori does not leave her and causes constant seizures, nightmares and manifestations of aggression. She feels something is wrong…

Loomis, who also miraculously survived that night, decides to capitalize on this and writes a book that reveals the essence of Michael, his story, the story of Lori and the events of two years ago. It is from this book that Lori learns about who she really is. The shocks of the past years, severe mental trauma, strained relationships within her new family and reading the book become an unbearable burden for her, and she gradually begins to go crazy, following the same path that Michael did in his time. 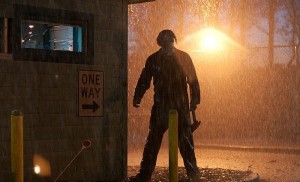 It is this, half-mad, desperate, that Michael finds her, led to Haddonfield by the ghost of his mother. And Lori, in fact, also begins to see this ghost, astrally she becomes one with Michael. Michael again does not kill her, but takes her to a lonely hut, where they are caught by the Haddonfield police. During negotiations involving Dr. Loomis, Michael stabs him in the stomach with a knife, after which he is shot by the police. Laurie takes the knife from Michael’s hand and approaches Dr. Loomis. There is a short burst and Lori falls …

Final shots – Lori is in a psychiatric hospital. Crazy look, animal smile. And she smiles at her mother, whose ghost appears from the air and goes to her.

In the remake of Rob Zombie, Michael Myers is by no means a manifestation of some otherworldly forces. Here he appears before us as an ordinary child with an unstable psyche, which is increasingly being destroyed under the pressure of the surrounding society. He eventually goes insane and starts his bloody business. Here, his main goal is to continue the work of the deceased mother – to try to save his family, no matter what. And although Michael grew up physically in the hospital, he is still a child at heart. And this is reflected in the second part, where Michael appears in a two-faced way – a healthy man in reality and a little boy in his soul. And he is driven by the ghost of his mother, who seems real to him. But, this is only an imaginary vision created by Michael himself to justify his actions. He thinks that the ghost of his mother is leading him to Haddonfield to his sister, however, it is he himself, his subconscious is striving there. 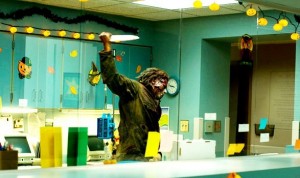 It is worth noting that in the remakes of Rob Zombie, the murders committed by Michael are much more brutal and sophisticated than in the original franchise. And there is a logical explanation for this. In the original, Michael was evil incarnate. In fact, he did not control himself, he was controlled by a certain sect. Therefore, killing random people was not important to them – they had a specific goal. In the films of Rob Zombie, Michael is a person, a person striving, no matter how strange it may sound, towards the bright goal of family reunification. And in every person he saw an obstacle on the way to his goal and the cruelty of murders – these are just signs that he has a soul, indignant and gloomy, but still it is.

Man or incarnation of evil? Rob Zombie presented us with the image of a man, mentally ill, but a man. He does not know how to drive a car, which is quite logical. And, unlike the original films, where he was completely silent, in the Rob Zombie films, he constantly makes some kind of sounds, groans or wheezes. Michael is here, as a kind of embodiment of justice. If you pay attention, then almost all of his victims are human sinners. Laurie’s promiscuous girlfriends, the hospital staff, the occasional truck driver, the people on the field who tried to kill him for no reason, and even Dr. Loomis, who made a “wrong turn” in an effort to make money. Michael Myers is here – as a weapon of retaliation, designed to cleanse the world of filth. Well, the rest of the casual victims – they, as they say, were at the wrong time and in the wrong place and were perceived as obstacles to achieving the goal.

Michael appeared before us in two images. As the embodiment of ideal evil, possessed by an ancient curse and ruled by a mysterious sect, and as an ordinary person who broke down under the pressure of a “sinful” society. Different origins – one result. Before us is the image of an inexorable and cruel maniac, for whom there are no obstacles on the way to his goal. A pale mask with eye sockets gaping with emptiness, silence and a hand clutching a knife. The mystery of his personality, the nature of his appearance and the origins of his hatred. All these elements combine to form the image of one of the most mysterious and striking serial killers in the history of cinema.