Skip to content
Home > Chemistry > Learning tasks and standards for their solution
Published 23.05.2022 by admin

Learning tasks and standards for their solution

Task number 1. Give the structures of heterocyclic bases that are part of nucleic acids. What tautomeric transformations are possible for uracil and guanine? For each of them, write a complementary interaction with the corresponding bases.

Decision standard. The composition of nucleic acids includes heterocyclic bases of the pyrimidine series – uracil (in RNA), thymine (in DNA) and cytosine in both DNA and RNA, and the purine series – adenine, guanine (in DNA and RNA). They are also called nucleic bases.

Uracil, cytosine, thymine and guanine are characterized by lactam-lactim tautamerism due to the presence of NH acidity. 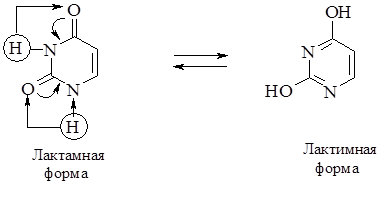 The lactam form is more stable, therefore, the bases are included in the composition of nucleic acids in the lactam form.

The flat configuration of the complementary pairs allows them to stack one on top of the other like a stack of plates.

Task number 2. Write the structure of N-glycosides: adenosine and deoxycytidine nucleosides. Write an equation for the hydrolysis of adenosine as a characteristic reaction for a glycosidic bond.

Decision standard. Nucleosides are called N-glycosides formed by nucleic bases with ribose or deoxyribose. Depending on the nature of the carbohydrate residue, the name of the nucleoside is formed from the trivial name of the corresponding nucleic base with the ending -idine for pyrimidine and -osine for purine nucleosides.

The formation of a glycosidic bond is carried out for pyrimidine bases C1-N1, for purine bases – C1-N 9 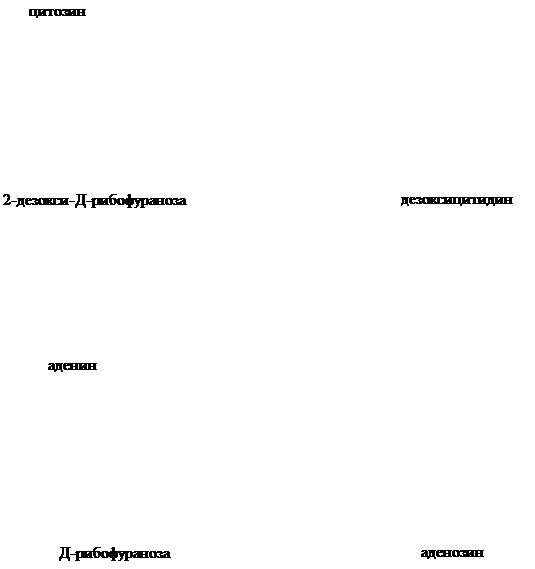 Nucleosides are cleaved in an acidic environment, but are resistant to hydrolysis in a slightly alkaline environment.

Task number 3. Give a scheme for obtaining adenosine triphosphoric acid (ATP), which is the driving force behind biochemical processes in the body.

Decision standard. Nucleotides are phosphorylated nucleosides. Typically, in nucleosides, the hydroxyl group at C-5′ of the pentose residue is etherified. This is a nucleophilic substitution reaction.

A new compound with an ester bond was formed – a nucleotide: adenosine-5′-monophosphate (adenylic acid, AMP). When building ATP from AMP, macroergic bonds are formed and energy is accumulated (31.2

During hydrolysis, energy is released and used in the body for other energy processes. Phosphoric acid residues are phosphorizing other compounds.

Task number 4. Write a scheme for the conversion of lactic acid into pyruvic acid with the participation of the coenzyme NAD + . 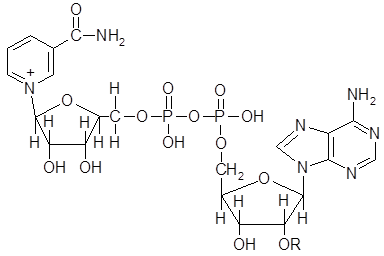 The conversion of lactic acid to pyruvic acid with the participation of NAD + is an example of an oxidation-dehydrogenation reaction. Two hydrogen atoms are removed from the substrate. One of them – hydride – ion reacts with the pyridinium cation, the second in the form of a proton remains in the environment.

The reduced coenzyme NADH can then participate in the redox reaction as an electron donor.

Task number 5. Define the primary structure of nucleic acids. Describe the structure of the DNA chain with the nucleotide sequence dA-dC-dG-T.

Decision standard. The primary structure of a nucleic acid is the sequence of nucleotides (the order in which the nucleotides are connected). The formation of a polynucleotide chain is carried out by binding the phosphate residues of the OH group at C-3′ of the nucleotide residue. DNA chains are built from such fragments. The principle of constructing the primary structure of RNA is the same with two exceptions: the pentose residue is D-ribose, and in the set of heterocyclic bases, not thymine, but uracil.

The DNA nucleotide sequence encodes genetic information that must be passed on during cell division. This is done by accurately recreating (replicating) DNA molecules. First, the double strands of the double helix begin to split, and a new strand is formed along each of them due to complementarity.

Thus, from one DNA molecule, two are formed identical to the original and to each other. Similarly, on a despiralized DNA molecule, replication of I-RNA molecules occurs, the nucleotide sequence of which determines the amino acid composition of proteins that are synthesized in the body. 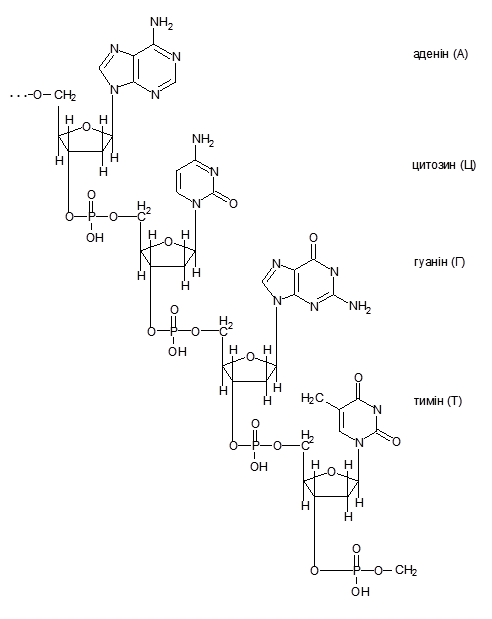 Decision standard. The secondary structure of DNA is a helix, which consists of two intertwined chains of nucleotides. A complete turn of the double-stranded DNA chain includes 10 mononucleotides. The structure of the double helix is supported by van der Waals forces of attraction that act between the complementary bases: adenine (A) – thymine (T) and guanine (G) – cytosine (C). In one direction along the helix, the bonds between carbon and phosphate residues will be 3′-5′, and in the second chain of the helix they will be 5′-3′, that is, they are antiparallel. Complementarity of the bases underlies the patterns to which the residues of DNA nucleotides of different origin are subject, which are formulated by Chargaff:

1. Give the structure of pyrimidine bases, which are part of nucleic acids, and name them.

2. Give the structure of the scheme of incomplete hydrolysis of 5-adenylic acid proceeding through the ester bond. Specify conditions.

1. Give the structure of purine bases that are part of nucleic acids. Name them. For one base, write the tautomeric forms.

2. Give the scheme of complete hydrolysis of 5 ¢ -cytidylic acid. Name the reaction products.

1. Give the structure of the NAD+ coenzyme. Give schemes of chemical reactions that underlie the action of this coenzyme in biological systems.

2. Write a reaction scheme for the hydrolysis of a nucleotide if it is known that phosphate acid and thymine will be the final products. Name the original product.

1. Give the structure of nucleic bases that are part of DNA. Name them.

2. Write the equation for the reaction of ATP hydrolysis to AMP

1. Give the structure of thymine, guanine and their complementary bases.

2. Give a diagram of the chemical reactions that underlie the action of the NAD+ coenzyme.

1. Give the structure of the nucleic bases that are part of RNA. Name them.

2. Give the structure of the compound, when heated in the presence of a mineral acid, phosphoric acid, deoxyribose and guanine were obtained in the ratio 1:1:1. Name the connection. Indicate the glycosidic and ester bonds.

1. Give the structure of thymine, guanine and their complementary bases.

2. Write the reaction scheme of nucleotide hydrolysis if it is known that the end products are phosphate acid and thymine (1:1). Name the original product.

1. Give the structure and lactam-lactim tautomerism of pyrimidine bases.

2. Write the reaction scheme for obtaining deoxyguanilic acid from the corresponding nucleoside. Indicate the ester bond.

1. Give the structure of thymine, guanine, and their complementary bases.

2. Write a scheme for obtaining ATP.

1. Write the tautomeric forms of uracil, thymine. Give it a name.

2. Give the scheme of dephosphorylation of 5 ¢ -deoxyadenylic acid.

1. Give the structure of complementary bases UA and CG.

2. Write a scheme for the complete hydrolysis of 5′-thymidylic acid.

1. Give the structure of ribose and deoxyribose N-glycosides with nucleic bases, write the hydrolysis reaction.

2. Describe the tautomeric transformations of thymine. Which form is dominant?

2. Give the structure of ATP and schemes of chemical reactions that are the basis of the biological action of a substance

1. Draw the structure of deoxyguanilic and deoxycytidylic acids, which are part of DNA.

2. Give the scheme of the reaction, which is the basis of the biological action of NAD+.