Kinematic diagram of the gearbox (VAZ-2108). 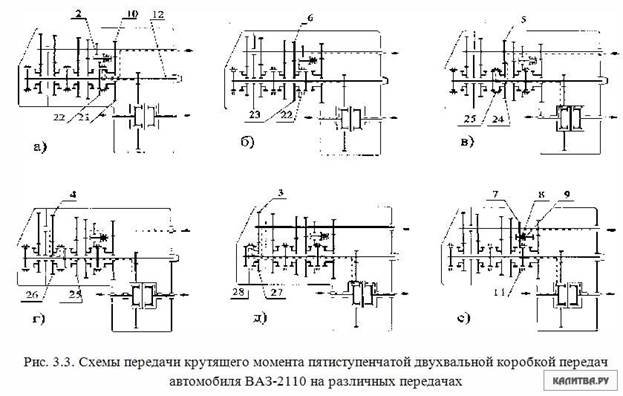 The third and fourth gears (Fig. 3.3, c, d) are switched on by moving the synchronizer clutch 25 to the right or left. In this case, with the help of a synchronizer, the secondary shaft 12 is connected to the driven gear 24 of the third or 26 fourth gear. The torque from the input shaft 2 to the secondary shaft 12 will be transmitted through gears 5 and 24 of the third gear or through gears 4 and 26 of the fourth gear.

The reverse gear (Fig. 3.3, e) is switched on by moving to the left the intermediate gear 8 of the reverse gear installed on the axis 9, due to which it is engaged with the drive gear 7 and the ring gear 11 of the clutch 22 of the synchronizer of I and II gears, thereby ensuring the transmission of torque torque from the input shaft to the secondary. With the help of an intermediate gear, the secondary shaft changes the direction of its rotation.

Reverse gear is switched on when the car is completely stopped, since only forward gears have synchronizers. Reverse gears are spur gears. 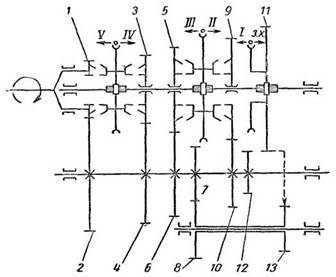 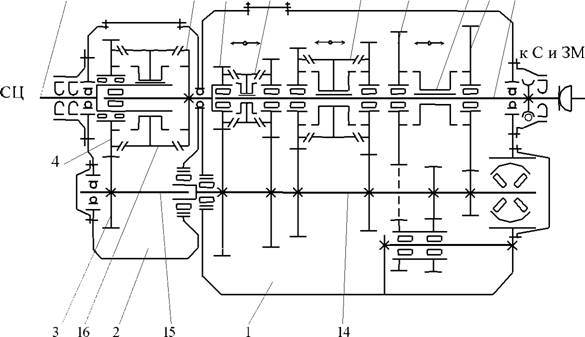 It consists of a main five-speed gearbox 1 and a front attachment gearbox – divider 2.

The main gearbox is kinematically similar to the previously discussed MAZ gearbox, with the exception of the following:

• transmission drive shaft 7 has splines in its front part, on which a gear coupling 6 with a cone is installed to ensure the operation of the synchronizer 16 of the gear divider.24

The inclusion of the main gears in the box (II … V) is carried out by two synchronizers 8 and 9.

The gear divider is a two-stage gearbox with gear ratios: in the lowest (direct) gear – 1.0 and in the highest (accelerating) – 0.815.

4. Kinematic diagram of the transfer case: 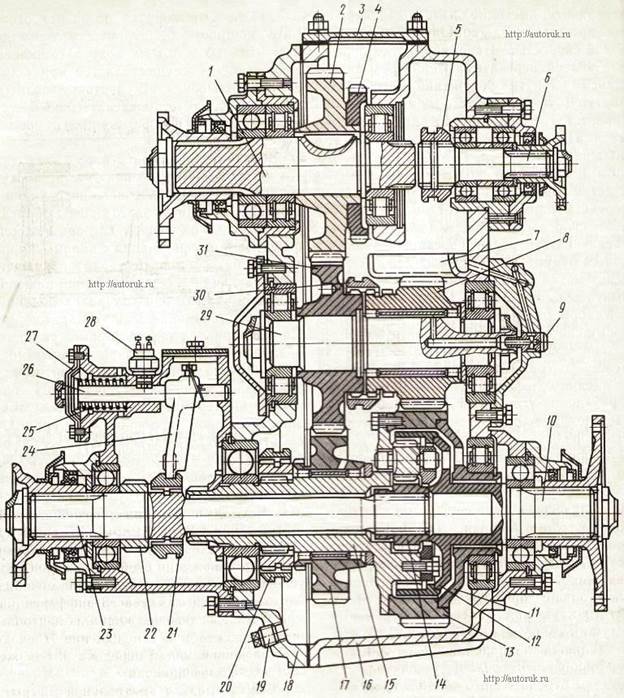 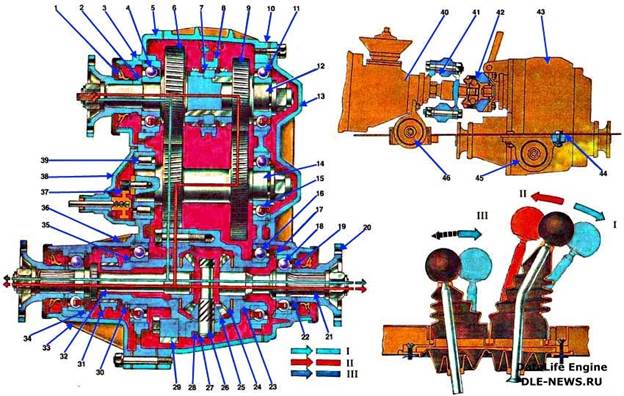 5. Scheme of the inertial synchronizer . 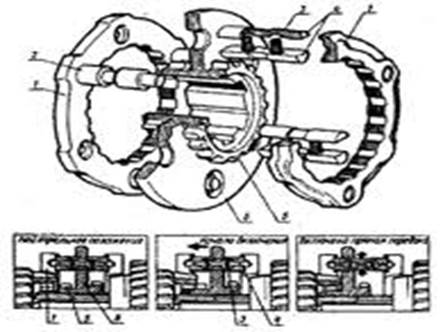 The inertial synchronizer consists of three main elements: equalizing and including, like a simple synchronizer;

– blocking – a device that prevents the inclusion of a gear clutch until the angular velocities of the parts to be connected are completely equalized, which ensures shockless and noiseless gear engagement.

Consider some designs of synchronizers used in gearboxes of modern tractors and cars.

Both sides of the synchronizer hub are fitted with brass blocking rings with toothed rims and ends with three longitudinal grooves. The width of the latter is greater than on the grooves of the hub by half the pitch of the teeth. The ends of the sliders enter the grooves of the rings, which ensures their joint rotation.

Thus, the primary and secondary shafts of the gearbox are rigidly connected to each other, which corresponds to the inclusion of the corresponding gear.

In the design, the friction elements are made in the form of conical surfaces on the movable engagement gear clutch and the blocking ring. As blocking elements, the internal teeth of the blocking ring and the end sections of the teeth cut on the gear hub are used. The pinion and blocking ring are elastically connected to each other in the axial direction by means of a compressed spring held by a retaining split ring. This contributes to the installation of structural parts in the initial neutral position and, at the same time, does not prevent the ring from blocking, unlocking it and engaging the gear.

The synchronizer works in the following sequence:

the conical friction surfaces of the coupling and the blocking ring approach each other;

the ring is blocked and, consequently, the clutch;

the angular velocities of the clutch and gear are aligned;

the ring is unlocked and the clutch, moving in the axial direction, is included in the full length of the teeth.

The design of the synchronizer differs from those previously considered, mainly in the design of the blocking element. Let’s consider its design in more detail. The synchronizer body is made in the form of a cylinder with internal cones at the ends, mounted on the disk of the including clutch and held on it by conical clamps placed in the radial holes of the disk. The coupling is mounted on a toothed shaft sleeve and is moved by means of a ring and pins. Inertial disk synchronizer with blocking fingers: blocking finger; multi-plate friction clutches. They are sometimes used in gearboxes on high power tractors and heavy vehicles to engage lower gears.

6 . Scheme of the pneumatic control system of the divider. 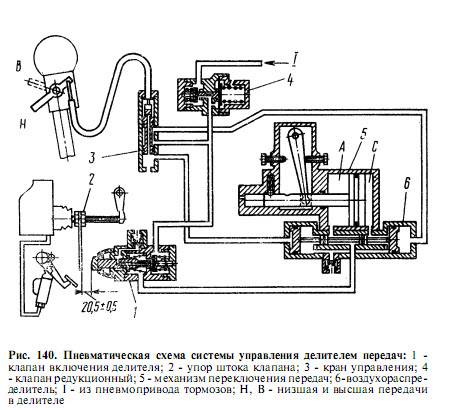