Answers matching the key are worth 1 point.

When analyzing the results, the following guidelines should be followed.

more than 19 – a bright extrovert,

more than 12 – a tendency to extroversion,

less than 12 – a tendency to introversion,

less than 5 – a deep introvert.

more than 19 – a very high level of neuroticism,

more than 13 – a high level of neuroticism,

less than 9 – low level of neuroticism.

more than 4 – insincerity in the answers, also indicating some demonstrative behavior and orientation of the subject to social approval,

Less than 4 is normal.

Describing a typical extrovert, the author notes his sociability and outward orientation of the individual, a wide circle of acquaintances, the need for contacts. He acts on the spur of the moment, impulsive, quick-tempered, carefree, optimistic, good-natured, cheerful. Prefers movement and action, tends to be aggressive. Feelings and emotions do not have strict control, prone to risky actions. You can’t always rely on him.

The typical introvert is quiet, shy, introspective and introspective. Restrained and distant from everyone except close friends. Plans and considers his actions in advance, does not trust sudden urges, takes decisions seriously, loves order in everything. Controls his feelings, he is not easily pissed off. Possesses pessimism, highly appreciates moral norms.

Characterizes emotional stability or instability (emotional stability or instability). Neuroticism, according to some reports, is associated with indicators of the lability of the nervous system. Emotional stability is a trait that expresses the preservation of organized behavior, situational focus in normal and stressful situations. It is characterized by maturity, excellent adaptation, lack of great tension, anxiety, as well as a tendency to leadership, sociability. Neuroticism is expressed in extreme nervousness, instability, poor adaptation, a tendency to quickly change moods (lability), feelings of guilt and anxiety, anxiety, depressive reactions, absent-mindedness, instability in stressful situations. Neuroticism corresponds to emotionality, impulsivity; unevenness in contacts with people, variability of interests, self-doubt, pronounced sensitivity, impressionability, a tendency to irritability. The neurotic personality is characterized by inadequately strong reactions to the stimuli that cause them. Individuals with high scores on the neuroticism scale in adverse stressful situations may develop neurosis. 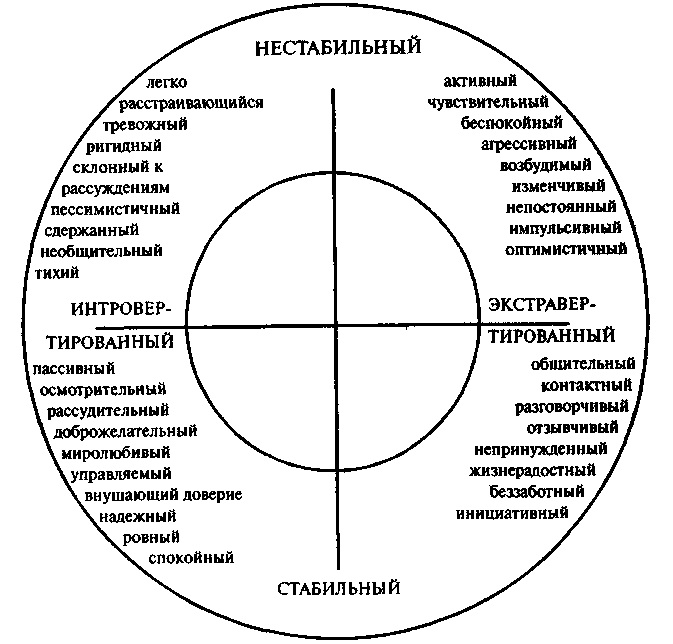 Explanation for the drawing “Eysenck circle”:

The presentation of the results on the scales of extraversion and neuroticism is carried out using a coordinate system. The interpretation of the obtained results is carried out on the basis of the psychological characteristics of the individual, corresponding to one or another square of the coordinate model, taking into account the degree of severity of individual psychological properties and the degree of reliability of the data obtained.

Drawing on data from the physiology of higher nervous activity, Eysenck hypothesizes that the strong and weak types, according to Pavlov, are very close to the extraverted and introverted personality types. The nature of introversion and extraversion is seen in the innate properties of the central nervous system, which ensure the balance of the processes of excitation and inhibition.

Thus, using the survey data on the scales of extraversion, introversion and neuroticism, it is possible to derive personality temperament indicators according to Pavlov’s classification, who described four classical types: sanguine (according to the main properties of the central nervous system, it is characterized as strong, balanced, mobile), choleric (strong, unbalanced, mobile), phlegmatic (strong, balanced, inert), melancholic (weak, unbalanced, inert).

A “pure” sanguine person (high extraversion and low neuroticism) quickly adapts to new conditions, quickly converges with people, is sociable. Feelings easily arise and change, emotional experiences, as a rule, are shallow. Facial expressions are rich, mobile, expressive. Somewhat restless, in need of new impressions, insufficiently regulates his impulses, does not know how to strictly adhere to the developed routine, life, system at work. In this regard, he cannot successfully carry out a task that requires an equal expenditure of effort, prolonged and methodical effort, perseverance, stability of attention, and patience. In the absence of serious goals, deep thoughts, creative activity, superficiality and inconstancy are developed.

Choleric (high extraversion and high neuroticism) is characterized by increased excitability, actions are intermittent. He is characterized by sharpness and swiftness of movements, strength, impulsiveness, vivid expression of emotional experiences. Due to imbalance, carried away by business, he is inclined to act with all his might, to be exhausted more than he should. Having public interests, temperament shows in initiative, vigor, adherence to principles. In the absence of spiritual life, the choleric temperament often manifests itself in irritability, efficiency, intemperance, irascibility, inability to self-control under emotional circumstances.

Phlegmatic (high introversion and high neuroticism) is characterized by a relatively low level of activity of behavior, new forms of which are developed slowly, but are persistent. It has slowness and calmness in actions, facial expressions and speech, evenness, constancy, depth of feelings and moods. Persistent and stubborn “worker of life”, he rarely loses his temper, is not prone to affects, having calculated his strength, brings the matter to the end, is even in relationships, moderately sociable, does not like to talk in vain. Saves energy, does not waste it. Depending on the conditions, in some cases, a phlegmatic person can be characterized by “positive” traits – endurance, depth of thought, constancy, thoroughness, etc., in others – lethargy, indifference to the environment, laziness and lack of will, poverty and weakness of emotions, a tendency to fulfill just habitual actions.

Melancholic (high introversion and high neuroticism). His reaction often does not correspond to the strength of the stimulus, there is a depth and stability of feelings with their weak expression. It is difficult for him to concentrate on something for a long time. Strong influences often cause a prolonged inhibitory reaction in a melancholic (hands down). He is characterized by restraint and muffled motor skills and speech, shyness, timidity, indecision. Under normal conditions, a melancholic is a deep, meaningful person, can be a good worker, successfully cope with life’s tasks. Under adverse conditions, it can turn into a closed, timid, anxious, vulnerable person, prone to difficult internal experiences of such life circumstances that do not deserve it at all.