Skip to content
Home > Ecology > Development and change of ecosystems
Published 23.05.2022 by admin

Development and change of ecosystems

1. Main questions of the theory

Biogeocenosis is a stable system consisting of biocenosis and inorganic components . (V.N. Sukachev.)

An ecosystem is a functional system that includes communities of living organisms and their habitat . (A. Tensley.) 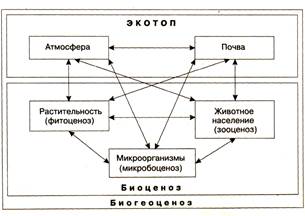 Connections between components arise on the basis of food connections and ways of obtaining energy.

The main properties of the ecosystem:

1. Circulation of matter and energy.

The structure of the biocenosis

1. Species structure – the diversity of species, the ratio of their abundance and biomass.

Ashby’s law : the higher the species diversity, the more stable the biocenosis is.

2. Spatial structure . It is determined by phytocenosis, which is characterized by layering.

Vertical zonality – tiered distribution of plants by ↑, due to their requirements for the amount of light.

Animals are also confined to a specific plant layer:

It is determined by the conditions of the habitat (illumination, t, soil composition).

3. Trophic structure – the relationship between the components of the eco-system, arising on the basis of food relations and ways of obtaining energy.

The trophic structure is represented by trophic chains and trophic networks . One link in the food chain is the trophic level .

Food links go in the direction of:

The arrows indicate the energy flow at the trophic levels.

Only 10% of the energy passes into the body of the consumer organism along with the increasing mass. This is the 10% rule (energy transfer rule in power circuits ).

A food web is a collection of several interconnected food chains, each of which is a separate channel through which matter and energy are transferred.

The rule of the ecological pyramid is a pattern that reflects the progressive decrease in mass, energy or individuals of each subsequent link in the food chain.

2. Density of species populations (number of individuals per unit S or V).

4. Biomass – the total amount of living organic matter in an ecosystem, expressed in units of mass, accumulated during the existence of an ecosystem.

5. Productivity – the formation of products per unit of time per unit S or V.

1. Stability – the ability to withstand changes created by external influences.

Factors that increase the stability of the biocenosis:

– a balanced cycle of substances.

2. Self-regulation – maintaining a certain number of populations at all levels of food chains.

Development and change of ecosystems

Any biogeocenosis develops and evolves.

Succession is a change of biogeocenoses (ecosystems), a directed and continuous sequence of the appearance and disappearance of populations of different species in a given biotope (habitat).

1. The existing ecosystem creates unfavorable conditions for the organisms that fill it (changes in the environment by the living organisms themselves) due to soil fatigue, incomplete circulation of substances, self-poisoning by decomposition products.

Digression is the simplification of ecosystems under anthropogenic influence.

General patterns of the successional process

1. At the initial stages, the species diversity is insignificant, productivity and biomass are low. These figures increase as the succession develops.

2. With the development of the successional series, the interrelationships between organisms increase, food chains and networks become more complicated, and the habitat is more fully mastered.

3. The number of free ecological niches is decreasing.

4. The processes of the circulation of substances and the flow of energy are intensified.

5. The rate of succession depends on the life span of the organisms in the ecosystem. (The longer, the slower the succession, the largest is the forest compared to herbaceous communities and aquatic ecosystems).

Agrocenosis is a community of living organisms created to obtain agricultural products and regularly supported by humans.

– relationships develop at the level of trophic relationships, but under the influence of a person: tillage, sowing, etc.;