Scale classification. Existing networks can be classified according to the breadth of user coverage as follows: global, regional (urban) and local.

Regional area networks (MANs) connect different cities, regions and small countries. Subscribers can be located 10 … 100 km. At present, each such network is part of some global network and does not differ in particular specificity in relation to global networks. Typical MANs operate at speeds from 56 Kbps to 100 Mbps.

Local area networks (LAN, or LAN) unite computers, usually of the same organization, which are located compactly in one or more buildings. The size of local networks does not exceed several kilometers (up to 10 km). As a physical communication line in such networks, twisted pair, coaxial cable, fiber optic cable are used. For example, a typical LAN occupies the space of a single building or a small science campus and operates at speeds from 40 Mbps to 2 Gbps.

To speed up the transfer of information between computers on a local network, special network controllers are used, and all computers on the network are running network software.

The main difference between local networks and global networks is the use of high-quality communication lines. All other differences are derivative.

Classification of networks by topology, or architecture. Network topology is a logical scheme of connecting computers by communication channels. Most often, local networks use one of three basic topologies: bus, ring, or star.

Workstations at any time, without interrupting the operation of the entire computer network, can be connected to it or disconnected. The functioning of a computer network does not depend on the state of a separate workstation. If a cable breaks anywhere in the network, the entire network becomes unusable. The maximum throughput of such networks is 10 Mbps. This bandwidth is not sufficient for today’s video and multimedia applications, so star networks are almost universally used.

The advantage of bus topology is low cost, ease of building and expanding the network. Disadvantages – low network speed and low reliability.

Ring topology . With a ring network topology, workstations are connected to each other in a circle: the last workstation is connected to the first, while the communication link closes the ring (Figure 4.2). 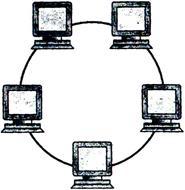 Laying cables from one workstation to another can be quite complex and expensive, especially if the geographic location of the workstations is far from a ring shape (for example, in a line).

Messages in such a network circulate regularly in a circle. Message forwarding is very efficient as most messages can be sent “on the road” over the cable system one after the other. The duration of information transfer increases in proportion to the number of workstations included in the computer network.

The main problem that arises in ring topology networks is that each workstation must actively participate in the transfer of information, and if at least one of them fails, the entire network is paralyzed. Connecting a new workstation requires a short network shutdown, as the ring must be open during installation. There is no limit on the length of the computer network, since it is determined solely by the distance between two stations.

A special form of ring topology is the logical ring network. Physically, it is mounted as a connection of star topologies. Individual stars are switched on with the help of special hubs. Depending on the number of workstations and the length of the cable between workstations, active or passive hubs are used. Active hubs additionally contain an amplifier for connecting from 4 to 16 workstations. The passive hub is exclusively a branching device (for a maximum of three workstations). Each workstation is assigned an address corresponding to it, to which control is transferred (from the oldest to the youngest and from the youngest to the oldest).

Star topology (figure 4.3). This type assumes that the host machine receives and processes all data from peripheral devices as an active data processing node. This principle is used in data communication systems such as RelCom e-mail. 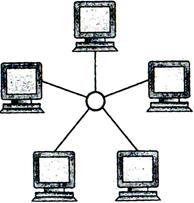 All information between two peripheral workstations passes through the central node of the computer network. To build a star network, a hub must be placed in the center of the network. Its main function is to provide communication between computers included in the network, i.e. all computers, including the file server, do not communicate directly with each other, but are attached to a hub. Star networks support advanced Fast Ethernet and Gigabit Ethernet technologies to increase network bandwidth.

When using this type of topology, the network bandwidth is determined by the computing power of the network node and is guaranteed for each workstation. Collisions (collisions of data) do not occur in such a network.

The cable connection is quite simple as each workstation is connected to a node. Cabling costs are high, especially when the central node is not geographically located in the center of the topology. When expanding computer networks, previously made cable connections cannot be used, because a separate cable must be laid from the center of the network to a new location.

The star topology is the fastest of all computer network topologies, since data transmission between workstations occurs through the central node (with its good performance) over separate lines used only by these workstations. The frequency of requests for information transfer from one station to another is low compared to that achieved in other topologies.

It is also an advantage that damage to one of the cables leads to the failure of only that beam of the “star” where the damaged cable is located, while the rest of the network remains operational.

The disadvantages of this architecture are higher cost, complex structure, and scalability features, which consist in the fact that hubs have a limited number of ports (connectors) for connecting computers. This must be taken into account when assessing the prospects for expanding the network.

Classification of networks according to the standards of organizations. There are many standards that ensure the functioning of the network. These include Token Ring, ATM, AppeleTalk, Enhernet, and others. Most modern LANs are built according to the Ethernet standard.

Ethernet and Fast Ethernet technologies are the most commonly used in practice and support most network applications. Gigabit Ethernet is a relatively new technology and is still rarely used.

Structure of the Internet

The Internet is a worldwide information network. The Internet is sometimes referred to simply and respectfully as the Network. This area of computer technology is now rapidly developing.

Telecommunications in a broad sense is communication between subjects (people, devices, computers) located at a distance from each other, excluding direct contact (“tele” – remote, “communication” – communication, message).

ARPAnet is the “grandmother” of the Great Network. ARPAnet uses a set of protocols called Transmission Control Protocols/Internet Protocols or TCP/IP for short. A protocol is a set of rules by which network subscribers exchange data.

The Internet is currently based on high-speed backbone networks.

The autonomous system must consist of at least 32 smaller networks. Usually large national networks act as autonomous systems. Examples of such networks are the EUNet network covering the countries of Central Europe, the RUNet network – the Russian network. Autonomous networks can be formed by companies specializing in providing Internet access services – providers, for example, Relcom in Russia.

The Internet is multifaceted. From a technical point of view, the Internet is an association of transnational computer networks operating on a wide variety of protocols, linking all kinds of computers, physically transmitting data over telephone wires and optical fiber, via satellites and radio modems.

The basis of the TCP / IP protocol family is the network layer, represented by the IP protocol, as well as various routing protocols. This layer provides the address space that moves packets around the network and controls how they are routed.

The most important application protocols are the Telnet remote control protocol, FTP file transfer protocol, HTML hypertext transfer protocol, e-mail protocols: SMTP, POP, IMAP and MIME. Each computer connected to the Internet has its own unique IP address, based on which the IP protocol transmits packets on the network. An IP address consists of four bytes and is written as four numbers separated by dots, such as 145.45.130.34. An IP address consists of two logical parts – a network number and a node number on the network. The number for a network included in the Internet is issued by a special division of the Internet – InterNIC (Internet Network Information Center) or its division. The node number is determined by the network administrator.

In practice, symbolic addresses are introduced. For this purpose, the DNS domain name system is used, which has a hierarchical structure. Component parts of the name are separated by dots.