Classification of compounds by functional groups

– the structure of the carbon chain (carbon skeleton);

– the presence and structure of functional groups.

Functional group – an atom or a group of atoms that determines whether a compound belongs to a certain class and is responsible for its chemical properties.

Classification of compounds according to the structure of the carbon chain

Depending on the structure of the carbon chain, organic compounds are divided into acyclic and cyclic .

Among acyclic compounds, there are limiting (saturated), containing only single bonds CC in the skeleton, and unsaturated (unsaturated), including multiple bonds C u003d C and C

Classification of compounds by functional groups

Molecules of organic compounds may contain two or more identical or different functional groups.
For example:

All classes of organic compounds are interconnected. The transition from one class of compounds to another is carried out mainly due to the transformation of functional groups without changing the carbon skeleton. Compounds of each class constitute a homologous series.

Homologous series – a series of related organic compounds with the same type of structure, each subsequent member of which differs from the previous one by a constant group of atoms (homologous difference).

For hydrocarbons and their derivatives, the homologous difference is the methylene group -CH 2 -. For example, homologues (members of the homologous series) of saturated hydrocarbons (alkanes) are methane CH 4 , ethane C 2 H 6 , propane C 3 H 8 , etc., differing from each other by one CH 2 group: 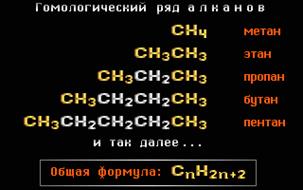 1. What type of organic compounds does chloroprene belong to (the starting material for obtaining some varieties of synthetic rubber):

3. Which of the following compounds belong to the class:
a) alcohols; b) carboxylic acids?

4. The structure of adrenaline reflects the formula

Specify the classes to which this connection can be attributed:

There are a huge number of organic compounds, which, along with carbon and hydrogen, include oxygen. The oxygen atom is contained in various functional groups that determine whether the compound belongs to a particular class.

The most important heterofunctional oxygen-containing compounds include carbohydrates C x (H 2 O) y , the molecules of which include hydroxyl, carbonyl and derivative groups.

To better understand the structure and properties of these compounds, it is necessary to recall the electronic structure of the oxygen atom and characterize its chemical bonds with other atoms.

Alcohols are compounds of the aliphatic series containing one or more hydroxyl groups. General formula of alcohols with one hydroxy group R–OH .

Alcohols are classified according to various structural features.

Dihydric alcohols with two OH groups at the same carbon atom R–CH(OH) 2 are unstable and, splitting off water, immediately turn into aldehydes R–CH=O. Alcohols R–C(OH) 3 do not exist.

Unsaturated alcohols with an OH group at a carbon atom connected to another atom by a double bond are very unstable and immediately isomerize to aldehydes or ketones. For example, vinyl alcohol CH 2 u003d CH-OH turns into acetaldehyde CH 3 -CH u003d O

Phenols are hydroxy compounds in the molecules of which the OH groups are bonded directly to the benzene ring.

VRML model of a phenol molecule

Depending on the number of OH groups, monohydric phenols (for example, the above phenol and cresols) and polyatomic phenols are distinguished. Among polyhydric phenols, the most common are dihydric ones:

As can be seen from the above examples, phenols are characterized by structural isomerism (isomerism of the position of the hydroxy group).

Carbohydrates (sugars) are organic compounds that have a similar structure and properties, the composition of most of which is reflected by the formula C x (H 2 O) y , where x, y ≥ 3.

Carbohydrates are found in the cells of plant and animal organisms and by mass make up the bulk of the organic matter on Earth. These compounds are formed by plants in the process of photosynthesis from carbon dioxide and water with the participation of chlorophyll. Animal organisms are not able to synthesize carbohydrates and get them from plant foods.
Photosynthesis can be viewed as a process of CO2 recovery using solar energy. This energy is released in animal organisms as a result of the metabolism of carbohydrates, which, from a chemical point of view, consists in their oxidation .

For most carbohydrates, trivial names are accepted with the suffix -ose (glucose, ribose, sucrose, cellulose, etc.).

In nature, the most common monosaccharides, the molecules of which contain five carbon atoms (pentoses) or six (hexoses). Monosaccharides are heterofunctional compounds, their molecules contain one carbonyl group (aldehyde or ketone) and several hydroxyl groups. For example:

From these formulas it follows that monosaccharides are polyhydroxy aldehydes ( aldoses , aldehyde alcohols) or polyhydroxy ketones ( ketoses , keto alcohols).
Ribose and glucose are aldoses (aldopentose and aldohexose), fructose is ketose (ketohexose).

However, not all properties of monosaccharides are consistent with such a structure. So, monosaccharides do not participate in some reactions typical of the carbonyl group. One of the hydroxy groups is characterized by increased reactivity and its replacement (for example, by the -OR group) leads to the disappearance of the properties of the aldehyde (or ketone).

Consequently, in addition to the above formulas, monosaccharides also have a different structure, resulting from an intramolecular reaction between the carbonyl group and one of the alcohol hydroxyls.
Section 3.2 shows the addition of an alcohol to an aldehyde to form the hemiacetal R-CH(OH)OR’ . Such a reaction within one molecule is accompanied by its cyclization, i.e. formation of a cyclic hemiacetal .
It is known that 5- and 6-membered cycles are the most stable ( part II, section 3.2 ). Therefore, as a rule, the interaction of the carbonyl group with the hydroxyl at the 4th or 5th carbon atom (numbering starts from the carbonyl carbon or the end of the chain closest to it).

Thus, as a result of the interaction of a carbonyl group with one of the hydroxyl monosaccharides, monosaccharides can exist in two forms: an open chain (oxo form) and a cyclic (semiacetal) form. In solutions of monosaccharides, these forms are in equilibrium with each other. For example, in an aqueous solution of glucose, the following structures exist:

This dynamic equilibrium of structural isomers is called tautomerism . This case refers to the cyclo-chain tautomerism of monosaccharides.

Cyclic α- and β-forms of glucose are spatial isomers that differ in the position of the hemiacetal hydroxyl relative to the plane of the ring.
In α-glucose, this hydroxyl is in the trans -position to the hydroxymethyl group -CH 2 OH, in β-glucose – in the cis -position.

Taking into account the spatial structure of the six-membered cycle (see animation), the formulas for these isomers look like:

In the solid state, monosaccharides have a cyclic structure.

The chemical properties of monosaccharides are due to the presence of three types of functional groups in the molecule (carbonyl, alcohol hydroxyls and hemiacetal hydroxyl).

For example, glucose as a polyhydric alcohol forms ethers and esters, a complex compound with copper (II) hydroxide / NaOH; as an aldehyde, it is oxidized by an ammonia solution of silver oxide and copper (II) hydroxide, as well as bromine water, to gluconic acid COOH-(CHOH) 4 -COOH and is reduced by hydrogen to a six-hydric alcohol – sorbitol CH 2 OH-(CHOH) 4 -CH 2 OH; in the hemiacetal form, glucose is capable of nucleophilic substitution of the hemiacetal hydroxyl by the -OR group (formation of glycosides , oligo- and polysaccharides ). Other monosaccharides behave similarly in such reactions.
The most important property of monosaccharides is their enzymatic fermentation , i.e. the breakdown of molecules into fragments under the action of various enzymes. Fermentation is mainly carried out by hexoses in the presence of enzymes secreted by yeasts, bacteria or molds. Depending on the nature of the active enzyme, reactions of the following types are distinguished:

In a living organism, in the process of metabolism, glucose is oxidized with the release of a large amount of energy:

An example of the most common disaccharides in nature is sucrose (beet or cane sugar). The sucrose molecule consists of glucose and fructose residues connected to each other due to the interaction of hemiacetal hydroxyls (1→2)-glycosidic bond :

Sucrose, being in solution, does not enter into the “silver mirror” reaction, since it is not able to turn into an open form containing an aldehyde group. Such disaccharides are not capable of being oxidized (i.e., being reducing agents) and are called non- reducing sugars.

There are disaccharides whose molecules contain a free hemiacetal hydroxyl; in aqueous solutions of such sugars, there is an equilibrium between the open and cyclic forms of the molecules. These disaccharides are easily oxidized, i.e. are reducing , such as maltose.

In maltose, glucose residues are connected by a (1 → 4)-glycosidic bond.

Disaccharides are characterized by a hydrolysis reaction (in an acidic environment or under the action of enzymes), as a result of which monosaccharides are formed:

During hydrolysis, various disaccharides are split into their constituent monosaccharides by breaking the bonds between them ( glycosidic bonds ):

Thus, the hydrolysis reaction of disaccharides is the reverse of the process of their formation from monosaccharides.

These are substituted carboxylic acids, in the molecules of which one or more hydrogen atoms of the hydrocarbon radical are replaced by amino groups.

Amino acids are classified according to two structural features.

1. Depending on the mutual arrangement of the amino and carboxyl groups, amino acids are divided into α-, β-, γ-, δ-, ε-, etc.