Hurricanes, storms, tornadoes are wind meteorological phenomena , belong to natural disasters , can cause great material damage and lead to death of people. 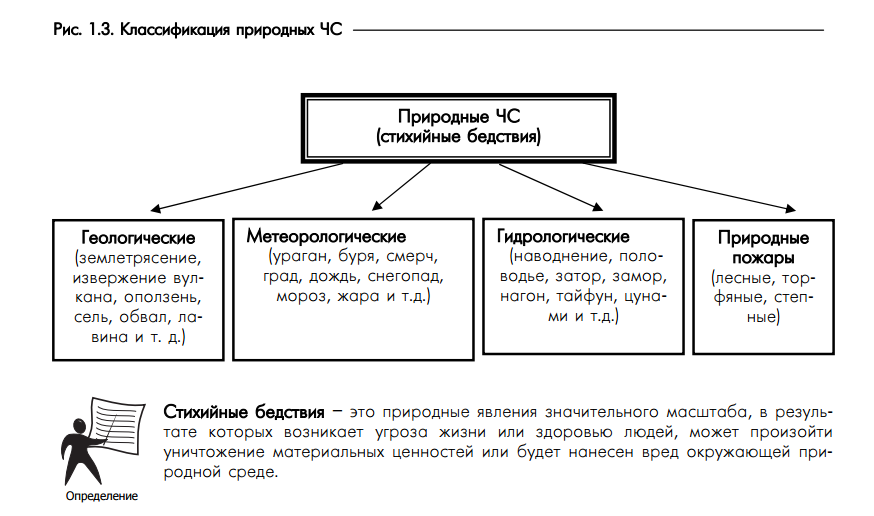 Wind is the movement of air relative to the earth’s surface, resulting from the uneven distribution of heat and atmospheric pressure. The main indicators of wind are direction (from a high pressure zone to a low pressure zone) and speed (measured in meters per second (m/s; km/h; miles/hour).

Many words are used to indicate the movement of the wind: hurricane, storm, storm, tornado … To systematize them, they use the Beaufort scale (developed by the English admiral F. Beaufort in 1806) , which allows you to very accurately assess the strength of the wind in points (from 0 up to 12) according to its effect on land objects or on waves in the sea. This scale is also convenient in that it allows, according to the signs described in it, to fairly accurately determine the wind speed without instruments.

A hurricane is a fast wind movement, with a speed of 32.7 m / s (117 km / h), although it can exceed 200 km / h (12 points on the Beaufort scale) (Table 1), with a significant duration of several days ( 9-12 days), continuously moving over the oceans, seas and continents and possessing great destructive power. The width of the zone of catastrophic destruction is taken as the width of the hurricane. Often, the area of storm force winds with relatively little damage is added to this zone. Then the width of the hurricane is measured in hundreds of kilometers, sometimes reaching 1000 km. Hurricanes occur at any time of the year, but most often from July to October. In the remaining 8 months they are rare, their paths are short.

A hurricane is one of the most powerful manifestations of nature, in its consequences it is comparable to an earthquake. Hurricanes are accompanied by a large amount of precipitation and a decrease in air temperature. The width of the hurricane is from 20 to 200 kilometers. Most often, hurricanes sweep over the USA, Bangladesh, Cuba, Japan, the Antilles, Sakhalin, and the Far East.

In half of the cases, the wind speed during a hurricane exceeds 35 m/s, reaching up to 40-60 m/s, and sometimes up to 100 m/s. Hurricanes are classified into three types based on wind speed:

The reason for such hurricane winds is the occurrence, as a rule, on the collision line of fronts of warm and cold air masses, powerful cyclones with a sharp pressure drop from the periphery to the center and with the creation of a vortex air flow moving in the lower layers (3-5 km) in a spiral towards middle and up, in the northern hemisphere – counterclockwise. Forecasters assign each hurricane a name or a four-digit number.

Cyclones [1] , depending on the place of their occurrence and structure, are divided into:

– a tropical hurricane if it is born in the Atlantic Ocean and adjacent seas. North and South America. Hurricane (Spanish huracán, English hurricane) named after the Mayan wind god Huracan;

– typhoon – if it originated over the Pacific Ocean. Far East, Southeast Asia;

– cyclone – in the Indian Ocean region. 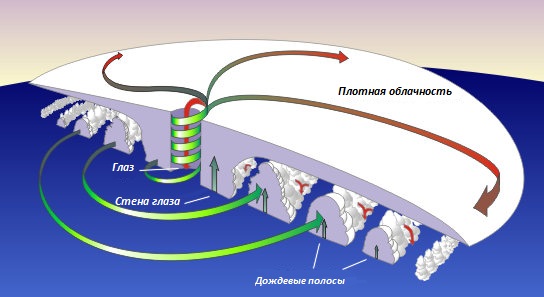 Rice. Structure of a tropical cyclone

The eye is the central part of the cyclone in which the air descends.

The wall of the eye is a ring of dense thunderstorm cumulus clouds surrounding the eye.

The outer part of a tropical cyclone is organized into rainbands – bands of dense thunderstorm cumulus clouds that slowly move towards the center of the cyclone and merge with the wall of the eye.

One of the most common definitions of the size of a cyclone, which is used in various databases, is the distance from the center of circulation to the outermost closed isobar, this distance is called the radius of the outer closed isobar.

2) Cyclones of moderate latitudes can form both over land and over water. They usually move from west to east. A characteristic feature of such cyclones is their great “dryness”. The amount of precipitation during their passage is much less than in the zone of tropical cyclones.

3) The European continent is affected by both tropical hurricanes that originate in the central Atlantic and cyclones of temperate latitudes. 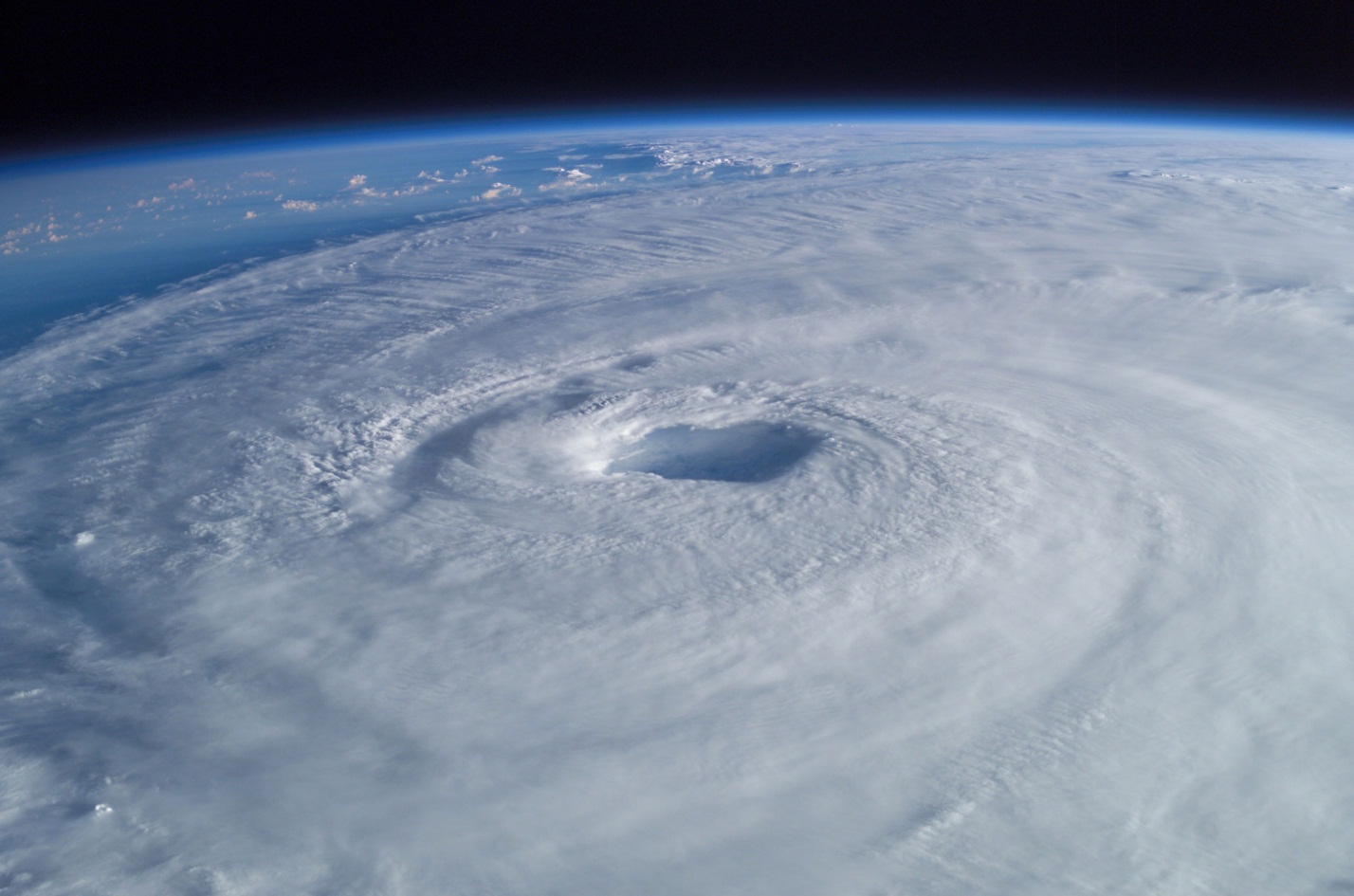 Rice. Hurricane Isabel 2003, photograph from the ISS – you can clearly see the characteristic eyes of tropical cyclones, the wall of the eye and the surrounding rain bands.

A storm (storm) is a type of hurricane that is inferior to it in strength. Hurricanes and storms differ only in wind speed. A storm is a strong, prolonged wind, but its speed is less than that of a hurricane of 62 – 117 km / h (8 – 11 points on the Beaufort scale). A storm can last from 2-3 hours to several days, covering a distance (width) from tens to several hundred kilometers. A storm that breaks out at sea is called a storm.

Depending on the color of the particles involved in the movement, there are: black, red, yellow-red and white storms.

Depending on the wind speed, storms are classified:

Storms are divided into:

1) Vortex – are complex vortex formations caused by cyclonic activity and spreading over large areas. They are:

– Sandstorms (dust storms) – which are played out in deserts, carry thousands of tons of sand and dust. In addition to a sharp deterioration in visibility, they are also dangerous due to high air temperature. Dust storms cause suffocation and lead to diseases (they carry various parasites), and equipment suffers to a large extent.

– Snow storms (winter) are formed in winter. Such storms are called snowstorms, snowstorms, snowstorms. Accompanied by severe frost and blizzard, they can move huge masses of snow over long distances, which leads to heavy snowfalls, blizzards, snow drifts. Snow storms paralyze traffic, disrupt power supply, and lead to tragic consequences. The wind contributes to the cooling of the body, frostbite.

– Squall storms – arise suddenly, and in time are extremely short (several minutes). For example, within 10 minutes the wind speed can increase from 3 to 31 m/s.

2) Stream storms are local phenomena of small distribution, weaker than whirling storms. Pass most often between the chains of mountains connecting the valleys. Subdivided into:

– Stock – the air flow moves down the slope.

– Jet – the air flow moves horizontally or up the slope. 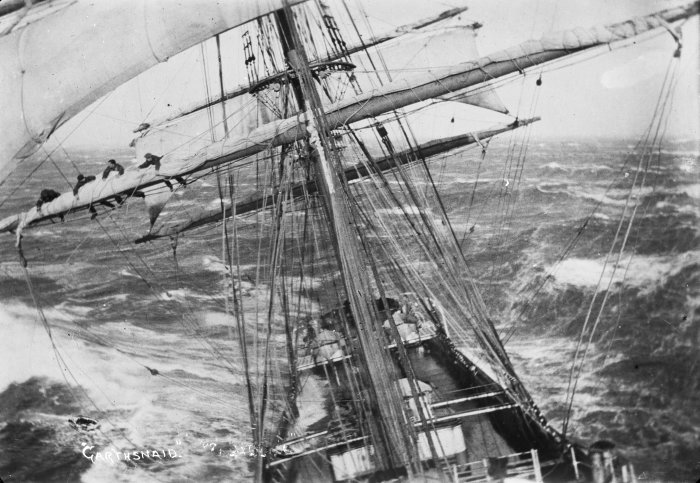 Rice. Storm (storm.) Work on the masts of a sailing ship in a storm.

Tornadoes (in the English terminology tornado from Spanish tornar “twist, twist”) is an atmospheric vortex in the form of a dark sleeve with a vertical curved axis and a funnel-shaped extension in the upper and lower parts. The air rotates at a speed of 50-300 km / h counterclockwise and rises in a spiral. Inside the stream, the speed can reach 200 km / h. Inside the column, there is a reduced pressure (vacuum), which causes suction, lifting up everything that is encountered on the way (earth, sand, water, sometimes very heavy objects). The height of the sleeve can reach 800 – 1500 meters, the diameter – from several tens above water to hundreds of meters above land. The length of the path of a tornado ranges from several hundred meters to tens of kilometers (40 – 60 km.). The tornado spreads, following the terrain, the speed of the tornado is 50-60 km/h.

A tornado occurs in a thundercloud (in the upper part it has a funnel-shaped extension that merges with the clouds) saturated with charged ions and then spreads in the form of a dark sleeve or trunk towards the land or sea surface. When the tornado descends to the surface of the earth or water, its lower part also becomes expanded, similar to an overturned funnel. Tornadoes occur both above the water surface and over land, much more often than hurricanes, usually in the warm sector of the cyclone, more often before the cold front. Its formation is associated with a particularly strong instability of the regular distribution of atmospheric air temperatures over height (atmospheric stratification). It is often accompanied by thunderstorms, rain, hail, and a sharp increase in wind.

Tornadoes are observed in all regions of the globe. Most often they occur in Australia, Northeast Africa, the most common in America (USA), in the warm sector of the cyclone before the cold front. The tornado moves in the same direction as the cyclone. There are more than 900 of them a year, and most of them originate and cause the most damage in Tornado Valley.

Tornado Valley stretches from West Texas to the Dakotas 100 miles north to south and 60 miles east to west. Warm, moist air from the north of the Gulf of Mexico meets dry, cold winds from the south from Canada. Huge clusters of thunderclouds begin to form. The air rises sharply inside the clouds, cools down there and descends. These streams collide and rotate relative to each other. There is a thunderstorm cyclone in which a tornado is born.

Bice-like – this is the most common type of tornadoes. The funnel looks smooth, thin, and can be quite tortuous. The length of the funnel considerably exceeds its radius. Weak whirlwinds and whirlpools that descend on the water are, as a rule, whip-like whirlwinds.

Blurry – look like shaggy, rotating clouds reaching the ground. Sometimes the diameter of such a tornado even exceeds its height. All craters of large diameter (more than 0.5 km) are indistinct. Usually these are very powerful whirlwinds, often compound ones. They cause enormous damage due to their large size and very high wind speeds.

Composite – a composite tornado in Dallas 1957. May consist of two or more separate blood clots around the main central tornado. Such tornadoes can be of almost any power, however, most often they are very powerful tornadoes. They cause significant damage over vast areas. Most often formed on the water. These funnels are somewhat related to each other, but there are exceptions.

Fire tornadoes are ordinary tornadoes generated by a cloud formed as a result of a strong fire or volcanic eruption. It is these tornadoes that were first artificially created by man (the experiments of J. Dessen (Dessens, 1962) in the Sahara, which continued in 1960-1962). “Absorb” the tongues of flame, which are drawn to the parent cloud, forming a fiery tornado. It can spread a fire for tens of kilometers. They are whip-like. Cannot be vague (the fire is not under pressure like whip-like tornadoes).

Water tornadoes are tornadoes that formed above the surface of the oceans, seas, in the rare case of lakes. They “absorb” waves and water into themselves, forming, in some cases, whirlpools that stretch towards the parent cloud, forming a water tornado. They are whip-like. Like fire tornadoes, they cannot be vague (the water is not under pressure, as in whip-like tornadoes).

Earth tornadoes – these tornadoes are very rare, they form during destructive cataclysms or landslides, sometimes earthquakes above 7 points on the Richter scale, very high pressure drops, the air is very rarefied. A whip-like tornado is located “carrot” (thick part) to the ground, inside a dense funnel, a thin trickle of earth inside, a “second shell” of earthen slurry (if a landslide). In the case of earthquakes, it lifts stones, which is very dangerous. 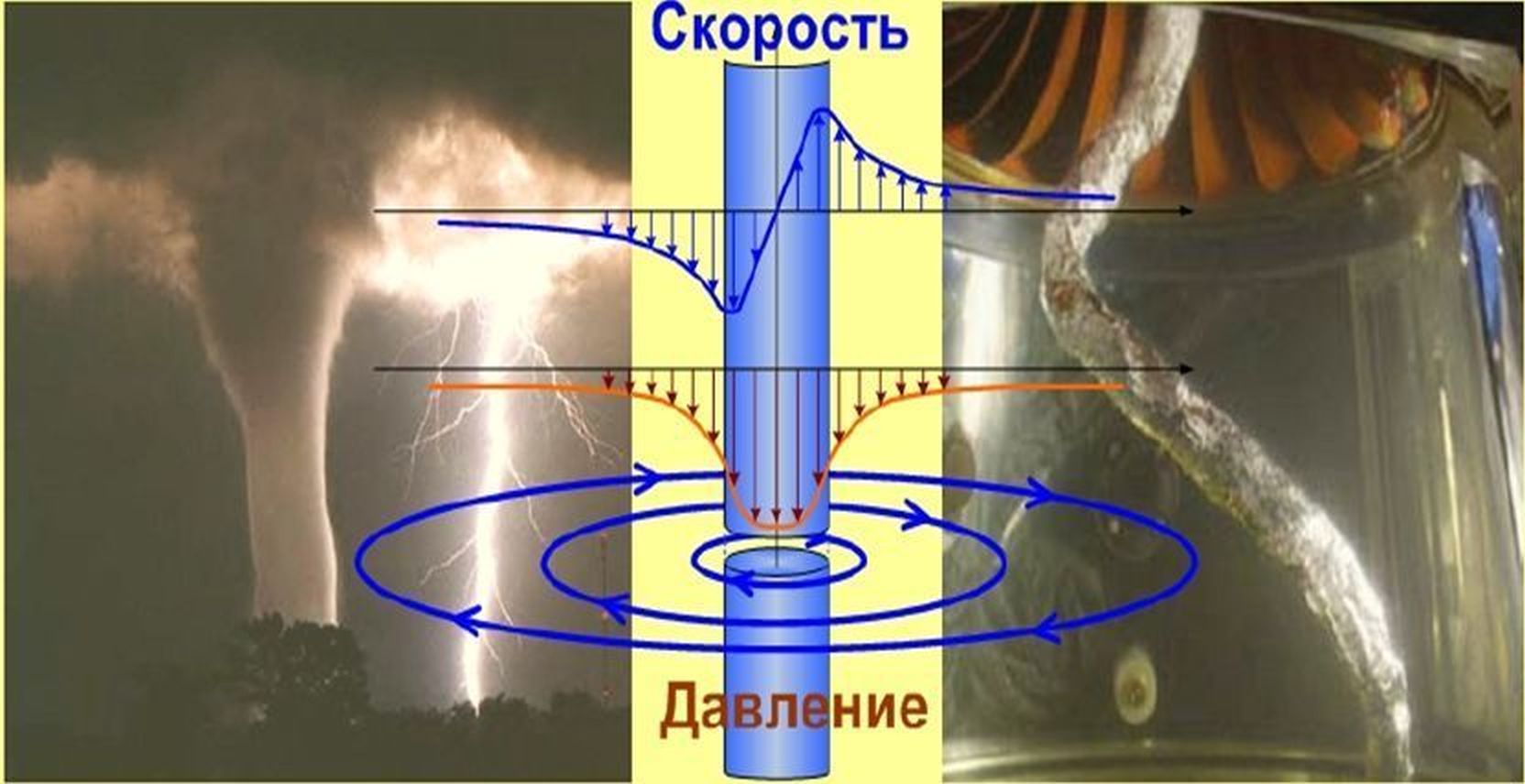 Snowstorms are snow tornadoes during a heavy snowstorm.

Rice. A tornado and a cavitation cord behind a radial-axial turbine and the distribution of velocity and pressure in the cross sections of these vortex formations.